My Little Pony: Friendship is Magic OCs! (Apologies that the poses are so samey; these are just rough concept sketches and I was paying more attention to design than composition.)
Argent and Titanium Twinkle came about when I wondered what the foals of Radiant Dawn and her husband Ironclad would look like. I thought it would be fun if they had a pegasus who acted like a unicorn and a unicorn who acted like a pegasus.
Argent is introverted, thoughtful, and scholarly, and his younger sister's misadventures drive him bananas as he's always trying to be the responsible one. Also his wings don't work, which causes him no small amount of insecurity, but don't let his quiet demeanor fool you; he's received plenty of warrior training from his father, and will become quite the fearsome fighter when the need arises. 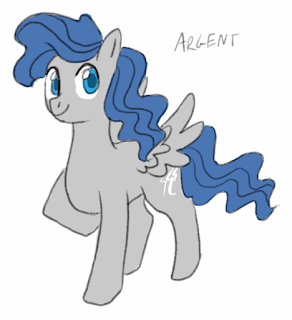 Titanium Twinkle, or "Twink" for short, is an impulsive and chatty young mare who doesn't put as much effort into her magical studies as she ought to, but due to her mother being a centuries-old alicorn, she does happen to know quite a bit about general magical theory off-hand. Her older brother's cautious ways test her patience, but working together they learn the importance of a healthy balance of calculation and risk. 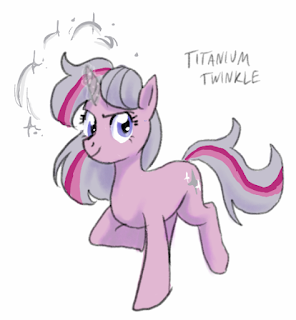 Also, their respective coat and mane are actually silver, not gray.

As detailed in a post from about three years ago, I eventually made Equestria Girls versions of these two, and a few months ago I finally got around to writing the fic I was talking about in that post! I'll put it up here on the blog eventually.