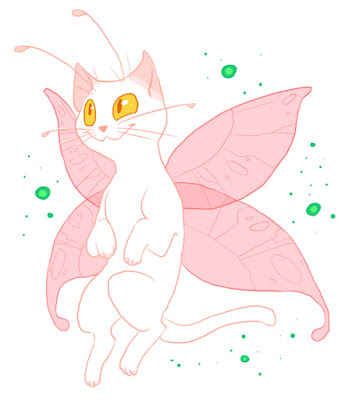 My dear boy Mallow being his usual charming self.
Posted by T. Arispe at 1:34 PM No comments:

A wriggling pink mass of space fungus splayed its tentacles into the control room, bowling over Hyren. He almost got sick right there, but he forced himself to keep his composure and complete the roll, springing back up to punch away a tentacle and wrestle several more.

“This is Engineering!” a female voice fizzed from behind Hyren. “How in the galaxy are you contacting us?”

“I managed to restore the network,” Dothan said. “We’re under space fungus infestation!”

“I know that!” the other voice snapped. “I’ve been trying to activate the repellent for half an hour now!”

Hyren tried to wrench the doors closed. It didn’t work, both because the dense fungus wouldn’t get out of the way, and because Hyren’s own stomach was still in upheaval. As he had to use more and more of his energy to control his digestive system, his strength had begun to give.

Hyren knew he at least couldn’t secure the station from here. Suppressing a moan, he moved for the door and it slid open to reveal a darkened, deserted hallway. If engineering wasn’t going to answer, he’d just have to go to them himself—after he collected his weapons and armour from his dormitory. Adrenaline would just have to help him ignore the nausea.

“I sure am glad I’m allergic to glowspice,” Dothan said.

Hyren froze and turned around. The ensign was trailing him like a hapless baby Nedler. “Just don’t get in my way,” Hyren said.

Their bare feet slapped on the floor as they made their way toward the lifts. They passed no one else in the silent corridors. It seemed as though everyone but Dothan had eaten the spiced apple pie. And with the station's’s network down, any nearby robot Petpets wouldn’t be of much assistance.

Hyren pushed the lift button, and in response got a red indicator light. He stared up at it, wishing it meant anything but a lift lockdown. Standing back, he contemplated prying the doors open with his bare hands and climbing up the cable. His stomach protested and he winced.

I have this incurable problem where I come up with minor, incidental characters for stories, and then start wanting to know more about them. Virtupets officer Dothan Reebitz from Worth Fighting For was supposed to be little more than a connection between Hyren and Virtupets at a critical juncture in Hyren's character arc, and a personified reminder to Hyren of everything he grew to find distasteful about his position after his adventure with Terra and Blynn. Dothan also ended up helping save the day during the climax because I wanted to give him a little bit of follow-up. But it left me wondering how he was so familiar with Hyren and why Hyren didn't really seem reciprocal.
In addition - for those who have never played Neopets - the site's programming has an intentional quirk where you cannot feed a Neopet a food item that contains the same number of characters in its name as the pet does (much to the frustration of people going for the Gourmet Club high score). For the real (virtual?) Hyren, one of those items is Spiced Apple Pie, a space food from the Virtupets Space Station. I found this a little ironic, and I figured there was probably some sort of hilarious in-universe story behind why Hyren, a veteran space marine, refuses to touch spiced apple pie.
And you know those times when two initially separate concepts click together in your head and you realize they'd be awesome woven together into a plotline?
I enjoyed writing more about Hyren's time at Virtupets and as a mutant, and coming up with ways to effectively challenge a guy who's eight feet tall, a thousand pounds of muscle, commands his own entire branch of the military, and can beat anyone in a swordfight. Turns out Hyren is very susceptible to both food poisoning and emotional turmoil. :) This story also serves as a good lead-up to Worth Fighting For and explains why Hyren reacted the way he did in that story.
It's a testament to Hyren's toughness that he's able to do what he does in this story while also suffering from severe nausea. I experienced some chronic stomach issues for a few years before writing this story, so I guess part of what inspired it was knowing how it feels to have to function while constantly feeling sick to your stomach, and wanting to portray someone who has the willpower to do what needs to be done despite his own body fighting him.
As far as edits go, I didn't actually have to change much here. I think it was a pretty solid story to begin with, and it just needed a few minor technical fix-ups.
I should also mention that this story actually won a Neopian Times Award in 2016 for Favorite Protagonist (Hyren). The NTAs were (maybe they're still going?) annual awards given by members of the Neopets fan community for outstanding Neopian Times publications. I still feel deeply honored and grateful for that award. It was really satisfying to know that the stuff I was submitting to the Times was being enjoyed by others.
Fair warning, this story does contain a few mentions of throwing up, but I tried really really hard to keep it as non-graphic as possible.
Chapter 1 - Chapter 2 - Chapter 3 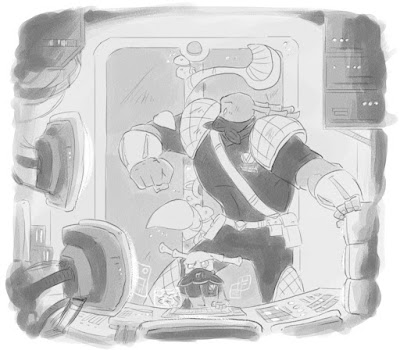 Grundo’s Café was as busy as ever. The canteen on the recreation deck of the Virtupets Space Station held a myriad of Neopets unwrapping their rehydrated chicken dumplings and carefully nibbling their electric nachos. Wall-mounted screens showed the latest in news and entertainment from around the galaxy, including an interview with some Alien Aisha musicians and the latest strike on Sloth’s forces on some far-flung world.

“Order up!” Gargarox, the chef-proprietor, hollered. A light blinked on the overhang above the kitchen, and the mutant Grundo slid a tray of food to a waiting Stopngo 400. The squat robot Petpet extended its mechanical arms to receive the tray, stomping off with it to one of the tables in the expansive diner. Gargarox turned back to the food synthesisers and picked up another dish, lumbering over to the long counter surrounding the kitchen to serve a patron sitting there.

It was at this counter that Hyren the blue Grundo and his owner Terra were perched, enjoying lunch.

“I can never finish these milkyway shakes,” Terra said, swinging her legs as they dangled from her stool. The copper-haired human woman set down a cup still half-full of a glittering dark beverage. “They’re so good… but so filling. Somehow.” She slid the shake over to the Grundo. “Want the rest?”

Hyren looked up from his beef rouladen and smiled. “Sure.”

It had been a good stay on the Space Station with his family. Relaxing, with the occasional chaotic hijinks, and a healthy dose of snark mixed in. It was what made his family the best in the universe.

Email ThisBlogThis!Share to TwitterShare to FacebookShare to Pinterest
Labels: neopets, stories on the blog, writing
Newer Posts Older Posts Home
Subscribe to: Posts (Atom)
This is an all-ages-friendly blog!