The Voyage of the Kaus Media is now available for digital download on Amazon (with a print version coming soon)!

I hope folks enjoy this novel! I've been working really hard on it and it's such a relief to finally get it out there!
Posted by T. Arispe at 10:33 AM No comments:

Email ThisBlogThis!Share to TwitterShare to FacebookShare to Pinterest
Labels: books, the voyage of the kaus media, updates

I realize that I have been very boring lately and I apologize. I've been super, super busy, not just with novel stuff but with life in general. Blog posts may be a little sparse.

But to make up for it, here's the cover for Voyage of the Kaus Media! (Click for larger view.) 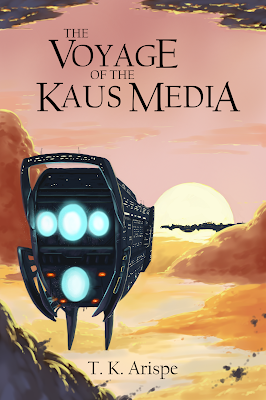 I had a lot of fun with it and I hope it makes a good impact. Vehicle design is tough and I have the utmost awe and appreciation for people who do it well. I was trying to evoke the aesthetic of WWI military ships, but I think I completely failed. So I tossed in some manatech engines and called it a day. :)

I just have a couple more steps to do for publishing, so the book is coming very soon! Painting the cover was the last big task--it's all downhill from here! (Like, effort-wise, not quality-wise. Hopefully.)
Posted by T. Arispe at 3:03 PM No comments:

Email ThisBlogThis!Share to TwitterShare to FacebookShare to Pinterest
Labels: art, books, painting, the voyage of the kaus media, updates


Book trailer! Because I could. And I enjoy a good storyboarding lark.

I had a lot of fun with this! And I will get the book out ASAP!

(Also now I have a better mental image of what the Kaus Media looks like, so portraying it on the front cover should not be as difficult.)
Posted by T. Arispe at 9:48 AM No comments:

Email ThisBlogThis!Share to TwitterShare to FacebookShare to Pinterest
Labels: animation, books, the voyage of the kaus media

Sorry I haven't posted anything lately! I've been very busy with my family, and my role as a family member and homemaker takes precedence over my art projects.

There's not much to report due to said busy-ness, but I am pleased to say that my proofreader has finished going over the manuscript for Voyage of the Kaus Media! I will be moving forward with that project ASAP. Before I publish it, I really want to finish this other project I've been working on--I don't want to give away too much, but it's something that won't make much sense to release after the book, is all I'm saying.

(I also have to paint the cover illustration, which is something I'm... kinda dreading because I do not feel at all confident in my vehicle-illustrating skills. I am not one of those people who can whip out like ten amazing vehicle designs in five minutes. And yet I have elected to depict an airship on the front cover whyyyy.)

Oh, but, I have managed to write a three-part series for the Neopian Times! It's the story of how Terra and her family discover who forged everybody's magic weapons. Good old faeries and their eidetic memories. Also Terra helps Jhudora sort out her issues a little.

I hope this story won't make it sound like I dislike faeries. I have nothing against faeries, but I really enjoy portraying them as properly complex beings with weaknesses as well as strengths--weaknesses that other Neopian creatures such as Neopets and owners compensate for, as mentioned by Blynn in the story, and that's what makes Neopia a functioning whole.

I like to imagine faeries as vastly powerful and immortal magical entities, but they suffer from a bit of emotional immaturity and are prone to being petty, prideful, and grudge-holding. (Not to say all faeries are like this, but even rather benevolent-seeming faeries such as Illusen have their issues.) It's these weaknesses that led to the faerie wars millennia ago, and that's part of why it's so vital for Neopets and owners to help faeries understand the importance of forgiveness.

I'm really excited to submit "Shadow Play"! I think I will do that once I publish Voyage of the Kaus Media. After that, I have an idea for an illustrated children's book that I'd like to attempt. And then I've been tossing around ideas for a steampunk Western with sentient robots, reanimated dinosaur fossils, a descendant of Prometheus and his wife (Prometheus, if you'll remember, was the actual name of Dr. Frankenstein's creation), and a German werewolf.

Email ThisBlogThis!Share to TwitterShare to FacebookShare to Pinterest
Labels: the voyage of the kaus media, updates, writing
Newer Posts Older Posts Home
Subscribe to: Posts (Atom)
This is an all-ages-friendly blog!