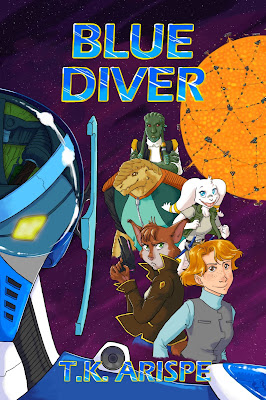 I've finished the cover for Blue Diver, and it was a lot of fun! Plenty of interesting stuff on this cover to tease the book! What's that thing on the right? A giant orange? Who are these motley creatures (including a Canadian)? Also, GIANT ROBOTS.

I'm also very pleased with this cover because I did some fiddling around with Corel Painter, and while it doesn't have the most sophisticated text generation options, I did discover some tools that allowed me to get some much better text effects than I've been able to with previous covers. And yeah, if you think the font looks familiar, you're not wrong. :) I liked that graphic so much that I decided to use it for the actual cover (in English, of course)!