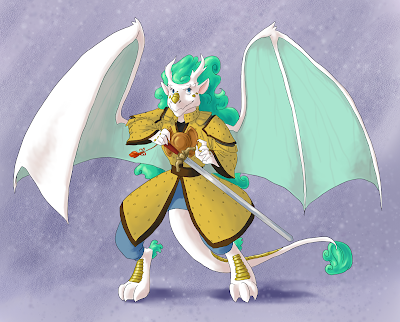 Yes, some art finally! I've been way super busy and have barely had the time to work on my "relaxation project", revising "Worth Fighting For" (turns out it needs some extensive revisions, but I'm really pleased with how it's turning out).

I've also put together a plot outline for my next novel! It takes place in an alternate-history America in 1894 and involves a spunky anthropology student, a paleontology-loving clockwork robot, and a French werewolf, among other things. Spoilers: the steampunk society it takes place in happened because a wealthy patron funded - and aided in - Charles Babbage's construction of his Analytical Engine, and mechanical computing exploded from there, followed by a breakthrough in crystal data-storage technology that led to the invention of sapient artificial intelligence.

I also may want to write a prequel to this one about said wealthy patron and his youthful adventures in Regency-era England with clockwork giant robots. I'm gonna be busy for a while.

But anyway, the reason I drew this was because I was kinda bored of having a Pokemon as a Facebook profile picture, so naturally I had to replace it with a Gargoyles fan design. I can't remember much about that second-season episode arc where they met gargs from different global cultures! I know there were Japanese gargs. Were there Chinese gargs? I just went ahead and made one up because I like qilin and I thought a qilin-based gargoyle would be fantastic.

Also she is wielding a jian (Chinese straight sword) and wearing Qing Dynasty brigantine armor because it's beautiful. <3 Real brigantine armor goes to your ankles, but I worried that would interfere too much with her awesome dino-legs.
Posted by T. Arispe at 9:24 PM No comments: