Just wanted to let everyone know that I am no longer accepting new clients for art commissions. Thanks for your business over the years. :)

On another note, after I finish my revision of On Borrowed Wings, I'm going to start putting some of my fanfic and short stories here on this blog! This will make them much more accessible--and quite frankly I'm tired of being associated with Fanfiction.net and FictionPress, which are not family-friendly places. I will create my own good, happy, wholesome place on the Internet! :)
Posted by T. Arispe at 12:59 PM No comments:

Email ThisBlogThis!Share to TwitterShare to FacebookShare to Pinterest
Labels: updates

- Getting rid of the dreaded "was" as much as possible. It's a repetitive and dulling verb, especially in descriptive prose, and the less you use it, the better. (Not to say that you should bend over backwards constructing unnatural-sounding sentences, but if you exercise your creativity, you'll find that you need "was" a lot less than you might think.)

- Changing passive verbs ("-ing") to active verbs ("-ed"). It makes prose stronger, plus it automatically eliminates a lot of instances of the deplorable "was".

- Cutting out a lot of extraneous information. For example, in chapter 6, Nimbus is mentally torn between the excitement of getting to pilot Eloreth, the strangeness of the whole situation, unease about Parshakian that she's trying to squelch, and homesickness and missing her dad, but I've found that multiple paragraphs rehashing these emotions and thoughts interspersed with the action makes the pacing feel odd, and tends to bore me as a reader with character information I already know.

So I'm trying to trim these things down, while leaving sparse reminders where I feel it is appropriate, such as Nimbus wishing her dad was there to see her when she leaves the hangar with Eloreth. Maybe this is just a personal writing preference, but I usually like to let characters' actions and dialogue speak for their mental state, unless they are undergoing a purposely placed bout of introspection. I want the reader to be actively engaged in putting together the pieces of the story and not have to be blatantly told everything, because as a reader I find that boring and effortless.

It's been said that the difference between art and entertainment is that art challenges people and invites them to think, and while I'm not pretentious enough to call my writing art, I do want readers to have a dialogue with the book and as a result come away with new insights about themselves and about life. I don't think that's too much to ask.

(Although, I have gone too far at times and made my prose too abstract and vague, so I kinda have to remember that just because something makes sense in my head doesn't mean other people will connect the dots in the same way. That's what editors are for.)
Posted by T. Arispe at 10:57 AM No comments:

One thing that I hope makes sense is some of Parshakian's actions in chapter 4, when he introduces Jacob to Eloreth. Specifically, it might seem a little confusing that he acts like he would need Jacob to open the silo and gain access to Eloreth, when we find out later on that Parshakian is a Dolen too and thus should have had easy access. But then Parshakian goes ahead and turns on the silo lighting, something that apparently only Nimbus could do earlier.

This isn't a plot hole--actually, Parshakian was intentionally acting powerless because he didn't want to reveal his powers to Jacob yet, and because he wanted to make Jacob believe that Jacob was the only person who could enter Eloreth. It was only when Jacob crossed him later that Parshakian used his abilities to intimidate Jacob into complying, something he only does as a last-ditch resort. Parshakian is the kind of person who prefers manipulation over brute force, but if manipulation fails then he really gets ugly. So it was actually Parshakian's mistake that he turned on Eloreth's silo lighting--a rare oversight from someone who's usually mentally on top of things. (He was probably also getting impatient with Jacob.)

Anyway, I hope it's something that readers will notice and get tipped off that Parshakian may be more than he seems.

I've ended up dropping several hundred words from the manuscript already, and I'm only a fourth of the way in. I realize now that I used to have a very wordy and superfluous writing style, and it's been a challenge to try to make my prose and my narrative more concise and to-the-point while still retaining a desirable level of poetry and creative enjoyment. Of course I don't want my stories to read like technical manuals, but I also don't want them to be emotionally overwrought and verbally excessive. It's a balancing act.
Posted by T. Arispe at 10:53 AM No comments:

Email ThisBlogThis!Share to TwitterShare to FacebookShare to Pinterest
Labels: on borrowed wings, writing

Whoo, it's been a while, hasn't it! Still super busy. But my latest project has been to get all of my novels on Amazon so people can find my ebook and print editions in one place. Skydwellers I consider already pretty well-revised (or at least recently-revised), but On Borrowed Wings has been bothering me for various reasons, so I'm taking this opportunity to bring it up to speed and add dialogue tags because augh. My prose has gotten so much better.

(Dialogue tags are the "he said"-"she said" bit that you're supposed to put with dialogue to clarify who's speaking. I used to think you could get away with omitting them, like so:

I pulled the garlic bread from the oven. "So what are you guys up to today?"

but not only does that read rather disjointedly, but it becomes problematic when there's more than one individual in the surrounding sentences:

She gave her sister a big hug and they laughed. "Let's go out for ice cream!" The two hurried out the door.

Notice how you can't actually tell who's speaking that dialogue. Yeah. Big problem.

So, unless it really interferes with the flow of the prose (and 90% of the time it won't), add a dialogue tag. You'll be glad you did.

This message was paid for by the National Agency for Dialogue Tags.)

Anyway, I'm only 9 pages in and already I've ended up changing quite a bit--not just in the prose, but I also wanted to fix up the character development a bit. I'm trying to do a better job of establishing Nimbus's and her dad's characters firmly in the beginning of the book--especially since I of course had a much better grasp on their characters by the end. I wanted to make apparent the hints of tension that neither of them realize have been building between them until they're faced with a very unusual situation and that tension reaches a breaking point as both of them respond in different ways.

I wanted to make sure to paint a clear picture of Jim Tennoji as a very logical, straitlaced, by-the-book person who hates making waves, while his daughter inherited much more of his late wife's freespirited creativity and open-minded, intuitive approach to life. But Nimbus is a sweet girl who loves her dad dearly and would never dream of saying no to him, even though she finds she can't quite agree with his heavyhanded ideas about what she should be doing with her life. Naturally, finding a high-tech giant robot in an archaeological dig site challenges both of them, as Jim can't bring himself to accept such a paradigm-breaking find while Nimbus wants to welcome it with open arms.

Of course, the situation worsens when Nimbus accidentally becomes the robot's pilot and suddenly they have a shady corporation breathing down their necks. But through everything that happens, Nimbus learns that while chasing down the things she wants, she has to keep an eye on the big picture and how her actions affect others, while Jim learns to let back in ways to approach life that he tried to suppress after his wife died, and that relationships and love between people continue regardless of whether they're physically present.

Part of the reason why I think I struggled to solidify all of this was because I wrote so much of the story in bits and pieces, having really no idea what I was doing in the beginning, so even after multiple rounds of editing it's still a bit shaky. Again, this is a great testament to how important it is to write something in one go. Don't do what I did and write until you run out of steam and then put it aside until you feel like working on it again (which could be years). You'll lose all of that momentum you'd been building as you immersed yourself in the characters, world, and plot, and when you come back to it you'll kind of have to start all over again remembering what you wanted to say with the story.
Posted by T. Arispe at 12:45 PM No comments: 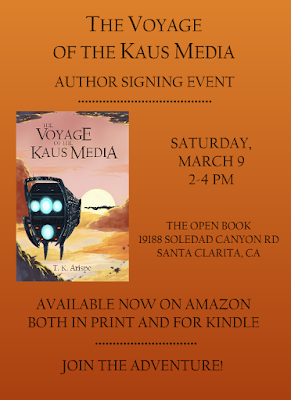 You are cordially invited to celebrate the release of this long-labored book with the author in SoCal! :) If anyone is interested, please stop by! Not just for the signing, but because The Open Book is a wonderful little secondhand bookstore with super friendly staff, and I enjoy supporting them.

Stay connected with the event page on Facebook!
Posted by T. Arispe at 3:34 PM No comments:

Email ThisBlogThis!Share to TwitterShare to FacebookShare to Pinterest
Labels: books, events, the voyage of the kaus media
The print version of Voyage of the Kaus Media is available!

I'm very pleased with how Amazon handles their print-on-demand--it ships extremely quickly (from a printer close to the customer), and I got to give the book a really nice matte cover. Enjoy!
Posted by T. Arispe at 3:31 PM No comments:

Email ThisBlogThis!Share to TwitterShare to FacebookShare to Pinterest
Labels: books, the voyage of the kaus media
Newer Posts Older Posts Home
Subscribe to: Posts (Atom)
This is an all-ages-friendly blog!