Sorry there haven't been many updates here lately, but I have been putting my creative energy into this novel manuscript! It's about halfway done right now and I'm trying to get it finished ASAP.

Just wanted to put out a reminder that you can follow my Facebook page here. I update that a little more than this blog, including updates on word counts.

I may have something to share soon, though!
Posted by T. Arispe at 9:51 PM No comments:

Email ThisBlogThis!Share to TwitterShare to FacebookShare to Pinterest
Labels: updates

I know creative things have been kind of sparse lately, but I have been working on Thunder Girl, and it's up to 11,000 words so far, so that's cool. I'm hoping I can get it to 50,000 words, but even if it doesn't reach that mark in the first draft, maybe editor feedback will cause me to expand on some things, like what happened with Voyage of the Kaus Media because I can't stop worldbuilding. :)

Anyway, to make up for it, here are some comics I drew for the Neopian Times that I had in reserve for when I didn't have any written things in the process of being submitted/published. I doubt I'll ever submit them now, so I might as well put them somewhere! (Please click for full-size.) 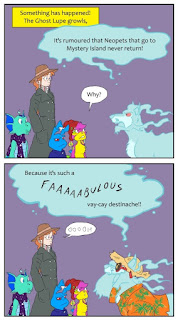 But WHY do they never return? The random event is completely ambiguous. Terra and her family lived on Mystery Island when Terra was younger, and they can attest that it's a great place to live.

(Actually, funnily enough, on the website Terra's pre-Altador Neohome was in Neopia Central. It's just that it was made of bamboo, so when I started writing about the family again, I forgot where it was located and assumed that because of the construction material, it was on Mystery Island. I consider that an actual and rare retcon; in my headcanon, Terra originally lived in Neopia Central, but a short while after adopting Hyren, moved the family to Mystery Island, where they lived for a few years until Altador was rediscovered.)

Also, having fun with the family's winter wear. 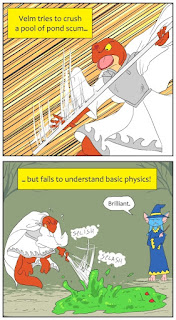 Neoquest II was an incredible piece of programming, but its combat text generator comes up with some funny things sometimes due to combinations of phrases. You just keep trying, Velm.

I really think this could work though!! Don't you?! I don't understand why pets wouldn't like this!!
Posted by T. Arispe at 4:34 PM No comments: