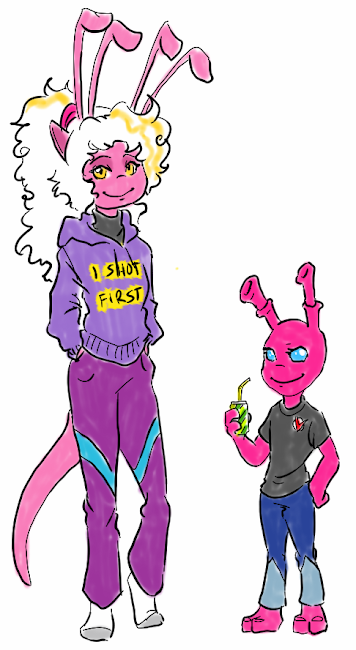 While I'm waiting for my proofreader to finish going through Earthkeepers, I've gotten started on that cute fun Neopets fanfic! Spoilers: Sophix and Eris are in it. Also spoilers: now-Commander Cassegrain is on military leave, while Sophix is pretty much financially set for life after the events of Worth Returning For so she only has to work if she wants to. (Which she probably does still want to because she seems to enjoy her job.)
Anyway, I found myself with some doodling time and just had to do some concept sketches of these two gals kicking back at Terra's house for a fun holiday full of Neoquest and friends and food. And probably some trips to the beach. Yayyyy for happy fun times after you've saved the galaxy. :) Also, it's just nice to portray these two getting along so well after they were enemies in the first part of Worth Returning For. Friendship is magic!
Posted by T. Arispe at 9:32 PM No comments: 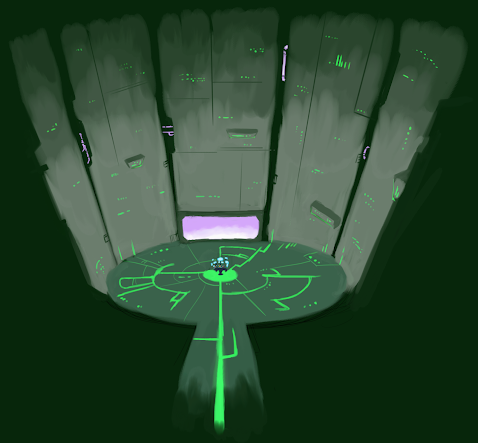 For the next art prompt on my Goodreads group, "draw something big", I decided to sketch down a little Earthkeepers environmental concept art! (It's also character design... you'll find out why if you read the book!)
This is Core Control, the home of the Core Hosts. I won't give away too much, but let's just say this is probably the most important place in the world. :)
Posted by T. Arispe at 2:49 PM No comments:

All this writing has not left me a lot of time for that other thing I sometimes get paid for: art! I mean, I always have time for paid art commissions, but sometimes I forget to leave myself space for just plain doodling around.
I decided to try to fix that with a weekly art prompt thread in the group I run on Goodreads. Here's my piece for the prompt "draw your favorite season": 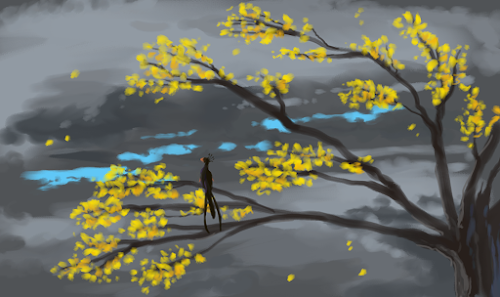 Yeah, I'm one of those autumn people. :) I love this kind of weather specifically. This was just a quick sketch, but I think it gets the point across: AUTUMN.
Also, I had to throw in a dinosaur because what's life without dinosaurs?! It's not a specific species, but I think it's probably a relative of Archaeopteryx.
Posted by T. Arispe at 2:16 PM No comments:

Email ThisBlogThis!Share to TwitterShare to FacebookShare to Pinterest
Labels: animals, art, painting, paleoart
Why yes, I should be asleep. Sometimes, though, when you live with a high-energy toddler who takes forever to wind down for bedtime, you need a few extra hours to yourself to unwind after she finally crashes. (Tonight I drew her, on her request, Daddy Pig from Peppa Pig eating chicken nuggets and butter. It was a masterpiece for the ages.)
While I'm waiting for my brain to shift to a lower gear, I thought I might as well put together a writing update!
Earthkeepers has been sent off to the proofreader! I finished going through my content editor's notes, and then meticulously picked through the prose, and I think this latest draft is looking really good! The most major changes in terms of plot were giving Kieri a more substantial character arc, and changing part of the climax to help Miette's conflict with Varine come to a more satisfying conclusion. I don't want to give away too much about that, but let's just say I had more fun with robots. This entire book is about fun with robots.
While I thought I was going to work on the cover while the manuscript was getting proofread, I'm very tired from all of this marathon writing, so I will probably give myself a break for a little while and just start on the cover when I feel like it. (That being said, I will definitely start working on it no later than when I make the final edits to the manuscript based on my proofreader's corrections and feedback. I definitely won't delay this novel's release due to illustration laziness, don't worry.)
On another writing-related note, I've also come up with a couple of new ideas for some short Neopets fics, because clearly I have become so emotionally invested in that cast that I cannot stop writing about them despite no longer actually playing Neopets. :)
One of the fics is more of Terra's family and friends playing Neoquest, because that seems to be a running joke. It's also about Terra's and Blynn's friendship being tested, as Blynn gets a little too into Quest Mastering and forgets that Neoquest is supposed to be fun for everybody, and if anybody stops having fun, the group may need to step back and reevaluate how they're doing things. I may or may not have based this on real experiences. (cough)
The other one is a story about Suhel staying with Lexora's family (from Return to Lynwood) for Giving Day (the Neopian equivalent of Christmas), where she helps the Fitchet-Brownings learn that holiday traditions are all well and good, but it is entirely possible to over-tradition yourself and not leave any room for spontaneity or time to just rest and soak in the season.
I got the idea when thinking about how I am actually not big on Christmas traditions because I don't like being rigidly adherent to an arbitrary system, because I am a renegade like that. To me, Christmas is still Christmas even if I celebrate it completely differently every year. It's all about remembering the Reason for the season. And spoiling children, that's important too. (Also discount Christmas candy on December 26th, let's not forget about that.)
I then realized the initial concept would work well with Suhel and the Fitchet-Brownings, especially since I previously established that she sometimes spends holidays with them. I thought it would be fun to get a look into that scenario. I just think there's something amusing about plunking an enormous, taciturn Werelupe into an Edwardian domestic setting.
I'm not sure exactly when I will get around to these two fics, but they are definitely on the drawing board.
For now, I should get some sleep.
Posted by T. Arispe at 12:49 AM No comments:

It's a quiet night, so I thought I'd put together a general update for those of you who like getting news through this blog.
I heard back from my content editor for Earthkeepers and I'm currently going through the manuscript, making revisions with her feedback. It doesn't look like the story requires any drastic changes, which is good because I really want to get it out. I know it's bad to rush things, but you know how sometimes you reach a point in a project where you're just so done with it? Not necessarily in a bad way, but in that you feel like you can either call it done now, or spend months tweaking minutiae, never feeling satisfied that it's absolutely 100% perfect.
In college, working on long and laborious animation projects, my mantra was "it doesn't have to be perfect, it just has to work". Because really, only the harshest critics will even notice tiny imperfections. And something that the creator, as their own worst critic, thinks is a huge flaw may not even be an issue for most of their audience. I have a fan who absolutely loves Skydwellers and it's her personal favorite book of mine--despite the fact that I feel like it's old and terrible. Clearly the imperfections don't bother her enough to detract from how much she enjoys it as a whole.
There comes a time when you just have to pull the trigger and let your story fly, and feel satisfied that even though it may not be utter writing perfection, it's still the best you could have made it with your current time, skills, and energy. I am not the type of writer who would like to spend years on a single book, waiting to publish it until I'm absolutely certain there is nothing wrong with it. I have so many story ideas that it feels like my creativity is just bursting at the seams to get them all out in a timely manner. (I'm also kind of impatient.)
Plus, honestly the nice thing about self-publishing is that if I do put a book out there and it turns out to have some sort of critical error, I can always correct it and the changes will go live in a few days. It's not actually a big deal in this wonderful era of digital publishing. :)
Stuff was pretty quiet for the last couple of weeks because really, writing that first draft of Earthkeepers drained me so much (and I had some other work going on besides) that while the editor was looking at it, I just wanted to let myself rest and recuperate for as long as I needed. And I'm glad I did, because the editor surprised me (in a good way) with her swift job, so it was good that I didn't procrastinate relaxing.
That said, I am still very much interested in putting more Neopets fanfic up here when I get the chance, possibly while my proofreader is looking at the manuscript. That's assuming I finish the cover art before she finishes the manuscript, because let's be real, I am not going to be able to resist doing the cover while the book is getting its final proofreading. :) I already have the cover planned and I think it's going to look really cool! Vastly different from Skydwellers's cover, but still cool. Think more along the lines of Pixeldust's cover.
Speaking of Neopets fic, I got way too excited the other night when the idea popped in my head for another story featuring Terra's zany Neopian family. You know you have a problem when you keep writing fanfic for a game you don't even play anymore. :) What can I say, I just got way too emotionally invested in my cast. I was planning on writing it this week, but then Real Work happened, wah-waaaah. Oh well, it's all about getting Earthkeepers moving, so it's all cool!
Also, I am still suuuuuper excited for the Thunder Girl audiobook (recording should start next month!!!!!) and the Pixeldust blog tour (in March!!!!!). Good stuff is happening with my books and I love it. I think one of the cool parts about writing a book is that once it's out there, it's out there. You can keep milking it for all it's worth, because it's A Thing That Exists. I mean, just look at everything that has come out of just seven Harry Potter books. Incredible. (I may or may not be implying that I want to be the next J. K. Rowling.)
So yes, fun times ahead. I'm looking forward to all of it. I'm starting 2021 off with a bang and I hope to keep that momentum going. Happy trails, all!
Posted by T. Arispe at 9:36 PM No comments: