The long-awaited third edition of Skydwellers is available for digital download on Amazon and in paperback form through Lulu.com!

To reiterate, there are no changes in this edition that I would consider major--it's a revision, not a rewrite. :) If you've read either of the first two editions, by no means feel like you need to read this one, unless you're like me and enjoy analyzing textual differences. If you've never read Skydwellers before and are thinking about buying it, I can now wholeheartedly recommend it, as I feel I've brought it up to the same level as my newer work.

For the literary analysts, here's a run-down of what's different:

- Made the overall tone lighter and not as intense.
- Fixed the prose problems.
- Patched up plot holes and gave more of an explanation to plot/world elements that were previously too vague.
- Changed Mathchis's true appearance (because I'd thought of a better character design for her).
- Gave Pops a slightly larger role.
- Took out about 90% of the banter, because I have decided I like characters who are actually nice to each other.

As for what's next... still hoping to hear back soon from my editor on Voyage of the Kaus Media. I also think I've got enough material for that Neopian Times series I'd like to work on.
Posted by T. Arispe at 5:18 PM No comments: 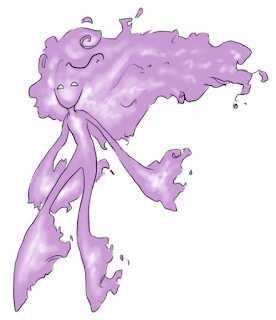 One fairly minor, but still somewhat important alteration in the new edition of Skydwellers is changing Mathchis's true appearance. In the first two editions, aether sprites are just amorphous purple flames, but I got this character design stuck in my head and I just felt like I needed them to be something a little more relatable and identifiably animate. Which means purple fire fairies, clearly. 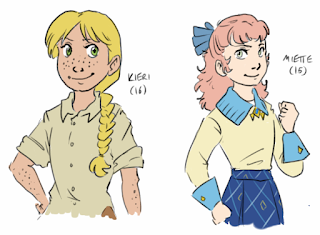 Okay, please don't take this as an indication that I am writing a sequel to Skydwellers--this was just a thought experiment, to see what would happen if I planned a sequel. I'd want to set it a few years after the first book, because I think it would be fun to see Kieri and Miette as teenagers and probably have them be the foremost main characters. Kieri would still be her usual spunky self, and Miette, while no longer able to use processes, is still super smart so I imagine she and Kieri would be doing Important things, probably related to connecting Aehirim and Passerim cultures alongside Rohui and Wilder.

If you're wondering why there aren't any sequels to my novels:

a) I like my novels to work as stand-alone stories, and

b) I have so many separate story ideas that I want to focus on writing those before I start to think about sequels.

Funnily enough, when I write fanfic I write lots and lots of stories that build on previous fics, but I think that's due to having fewer separate ideas for fan fiction; rather I tend to make up casts of characters and then continue to expand on them. Perhaps someday that will happen with an original story, but for now I really want to keep hacking away at my quite large list of separate story ideas.
Posted by T. Arispe at 3:01 PM No comments: