This short story is not strictly all that important in terms of character development or having a plot that ties in to later stories... but I thought it was cute and a fun part of Terra's family's saga.

It came about because I was reading old issues of the Neopian Times and came across the issue published after the first Mutant Day on Neopets--when the staff decided it would be hilarious to turn everyone's pets mutant-coloured for the day (except for those species who did not yet have mutant forms). I thought it was hilarious too. But other people didn't, so that was the first and last time that happened.

But when I was reminded of the incident years later, it made me think concerning Hyren's backstory which I had recently figured out, and how he'd probably be the only pet on Neopia overjoyed to become a mutant (again). So I think this story is a good bit of character development for him as he reaffirms what he values most in his life--and it isn't being big or strong.

Before putting it up here, I edited this story a fair bit from what got published in the Neopian Times; first off, because I was no longer working under a 4,000-word limit, I expanded a few things here and there to make the story make more sense. I also changed the ending to make Hyren more sympathetic to Blynn's plight because I feel like that's truer to his character. 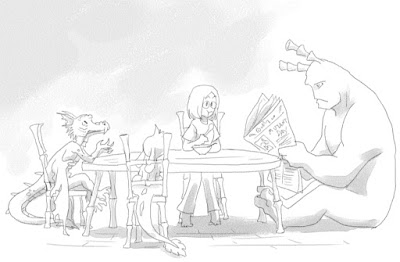 The first thing Hyren noticed when he woke up that morning was his legs hanging so far off the end of his bed that his knees bent and his feet touched the ground.

“What the…” the Grundo muttered. He sat up, wondering who had sawed off half of his bed while he was asleep—and it promptly collapsed underneath him.

The second thing he noticed was that his voice had taken a sharp turn for the baritone, and seemed to almost reverberate off of the dried bamboo walls of his Mystery Island bedroom.

“What’s going on…” Hyren said. He reached up to rub the sleep from his eyes—and froze midway. Because his hands were no longer blue and stubby.

They were dark green and the size of hams.

A bevy of thoughts and emotions whirled through his mind, struggling for dominance, and the one that breached the surface first was jubilation. “I’m back!” the suddenly mutant Grundo roared, leaping to his feet with a wild grin. His antennae brushed the ceiling.
Read more »
Posted by T. Arispe at 2:28 PM 6 comments:

Email ThisBlogThis!Share to TwitterShare to FacebookShare to Pinterest
Labels: fanfic, neopets, stories on the blog, writing
Newer Posts Older Posts Home
Subscribe to: Posts (Atom)
This is an all-ages-friendly blog!