Worth Searching For, Chapter 13 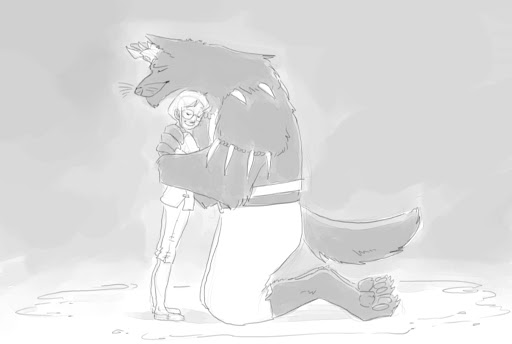 Terra realised she must have dozed off shortly after Pharazon left with Skoll. When she opened her eyes, instead of the mound of papers and scrolls from before, she saw tidy piles and stacks. She must have really needed more sleep, she thought.

“Wake up,” Isengrim said, gently shaking her shoulder. “It is time for the feast in your honour.”

Terra rubbed her eyes and put on her glasses, lifting herself into a sitting position. “Oh, I’d forgotten about that,” she said. Food did sound good by now.

Suhel stood nearby, her tail wagging. “Mm, I can smell it already!” she said as her tongue lolled out over her teeth. “Shall we go, milord?”

“What about Pharazon?” Terra asked, pulling herself to her feet.

“He will be there, with Skoll,” Isengrim said as he led them into the tunnel. “For a ceremonial feast such as this, every member of the pack is required to be present.”

“Meals are the only way you could ever pull that old mystic out of his hole,” Suhel muttered from behind him.

Howdy everybody! I hope your summer has gone well. Or your winter if you are in the Southern Hemisphere! I am so ready for autumn. I live in California and this triple-digit-weather madness has got to stop.

Just thought I'd drop an update! Work is progressing on the children's book, although right now it's going a little slow because my client doesn't feel satisfied with the story, so we're brainstorming solutions. Which is totally okay and to be expected. It just makes my work schedule a little weird because I have to wait to hear back from her before making any more progress.

In spite of that, I don't really feel like starting Earthkeepers yet because I don't like having too many projects going at once, especially because I have been really busy taking care of my family lately. (Turns out 2-year-olds are exhausting, who knew? *all the parents raise their hands*) I don't want to further divide what is already a limited amount of work time in my day. So I'll probably wait until after I finish posting Worth Searching For to plunge into another novel manuscript. Maybe I'll challenge myself to NaNoWriMo this November? We'll see.

Speaking of, I hope everybody is enjoying WSF! (And if you're not, that's okay, you can just skip those posts.) Things are about to ramp up in the plot. Also, one of the lessons I wanted to get across in this story is that it doesn't matter how friendly someone acts to you--if they do things that don't seem right, or even just seem a little off, listen to your gut and stay away from them.

I'll try to post more chapters as I can! Sometimes it's a little slow because I have to draw chapter illustrations (okay, I don't have to, but sometimes there are original characters that I want to give everybody a clear picture of, or important scenes that I think merit an illustration), but we are steadily working our way through!

Also, since I mentioned it earlier, can I just rant for a moment about Paper Mario: The Origami King? Specifically how I really loved it up until the ending, which just kinda completely ruined the game for me and left me with no desire to ever play it again? I'll avoid spoilers, so hopefully those of you who have finished the game know what plot point I'm talking about, but c'mon, seriously? How could they do that to us? I don't know if the writers were trying to be profound or what, but it just felt cheap to me. Like all of my hard work and effort through the game, my shaking my Switch Lite like a madwoman during the final boss fights (I may or may not have also been yelling like a madwoman...), was repaid by an emotional slap in the face and a mocking, "Well, technically you saved the Mushroom Kingdom, but...".

Why. So unfair. So arbitrary. So dumb. It kinda makes me not want to play any subsequent Paper Mario games if this is how I, the player, am going to be treated. I played through that game because I wanted a happy ending. And if an ending isn't happy for a character that the game urges you to get emotionally attached to, then to me, it's not a happy ending.

Well, at least the Crown Tundra DLC for Pokemon Sword and Shield should be coming out soon. I appreciate Pokemon because it knows how to not be depressing.

(Yeah, this is why I don't actually play many video games these days.)

Worth Searching For, Chapter 12 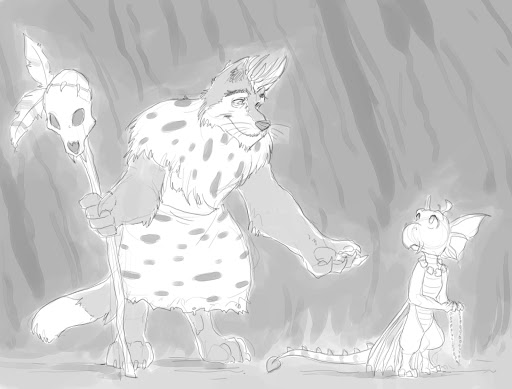 “C’mon, runt,” Suhel said, leading Pharazon down a winding tunnel. “You have wings, why don’t you use them to keep up with me?”

“Because I’m tired,” the faerie Draik said as he trudged after her.

These past two days had been an utter nightmare for him. Torn away from his siblings and his Petpet, forced to endure his owner’s exasperating optimism about the situation, now he was expected to live amongst a race of furry barbarians who treated him as a laughing stock. Sure they fed him and never lifted a claw to harm him, but it was obvious they disliked him.

“You know, runt,” Suhel said. “All sorts of things prowled these tunnels before we cleared them out.”

Her ears were perked, and her tail wagged lazily. Pharazon was familiar with this kind of body language from Neopet species like Lupes and Gelerts, and Petpet species like Warfs and Doglefoxes. The Werelupe was evidently feeling playful. That did not bode well for him.

Worth Searching For, Chapter 11

The trip back to the upper levels seemed to take much longer than the first trip—possibly because Isengrim seemed to be leading them on a route that did not involve crossing any bridges. Terra was okay with that, because her second attempt had been just as nerve-wracking as her first. She couldn’t really fool herself like that.

They had lunch with Suhel and Pharazon again. This time Terra treated herself to vegetable stew, having to drink it from the bowl as there was a distinct lack of cutlery at the Werelupes’ distinct lack of tables. All of the flatware was made of clay, decorated with crescent moons and abstract patterns. If Terra looked close enough she could see the indentations of paw pads where Werelupes had shaped the dishes before firing them.

Pharazon nibbled daintily at his food, shooting Terra occasional helpless glances. She returned them with smiles—making sure not to bare her teeth this time.

“How could you possibly smile in a situation like this?” Pharazon asked. “These Werelupes are nothing but cruel!”

Suhel frowned. “Who’s being cruel, runt?” she asked. “I just showed you the Opal Caverns! You’ll not see the likes of those in all the rest of Neopia!”

Worth Searching For, Chapter 10 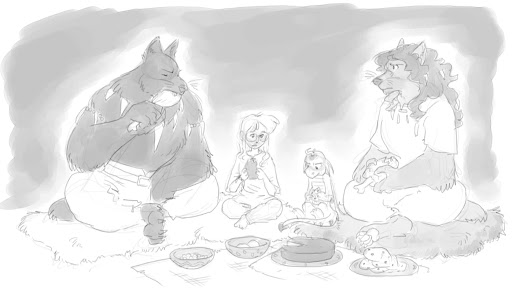 Thankfully they did not cross any more bridges after that, and a short while later Terra began to smell a mix of things sweet and savoury. In spite of everything, her appetite heightened and she realised it had been more than a day since she’d eaten a proper meal.

They emerged in a large cavern dotted with blazing firepits, the floors covered in mats and furs. The ceiling was low, and decorated with immense murals of the same subject matter as in Isengrim’s grotto—forests, moons, and hunts. Around the fires, Werelupes lounged in small groups, with spreads of food shared between them as they talked and laughed with wagging tails. One of them even broke into a low, atonal chant that her clanmates howled along to softly.

Isengrim’s tail suddenly curved upward and he led Terra over to one of the fires. “Suhel,” he called out.

The female sat with a group of other Werelupes, and her ears perked up at his voice. “Milord!” she barked. “How good of you to join us!” She ripped off a bite of meat from its bone.

Meanwhile, a glimpse of turquoise beside her caught Terra’s eye. “Pharazon!” she said.

“Terra?” the Draik asked, leaning out from behind the Werelupe. He looked shaken, but unharmed. “Oh, thank the faeries you’re all right!” he said.

Worth Searching For, Chapter 9

Terra awoke to something nudging her back. She opened her eyes and saw torchlight on stone walls, and memories of the previous day came flooding back to her. Looking over her shoulder, she saw Isengrim standing over her. “You can call me Terra, remember?” she said, offering him a tired smile. Despite the circumstances, she didn’t see the point in not trying to be friendly.

“Breakfast?” Terra looked at the ceiling of the grotto, listening to the dull roar of the waterfall outside, and realised there was no way to keep track of time in here. “I think I need more sleep,” she said.

Isengrim looked at her and frowned. “I let you sleep for a long while,” he said. “I began to worry you would not wake up. You are exhausted from your journey, but you need food to regain your strength.”

Terra did not think trying to argue with him would get anywhere, especially since last night she had promised not to cause any trouble with him. She figured it was best to go along with him for now, and she could catch up on sleep later. At any rate, her stomach was demanding to be filled. She threw back her fur blankets and staggered to her feet with a yawn. “Yeah, I guess you’re right,” she said. At least her stomachache had gone away. Sleep usually helped with that.