The first draft of Blue Diver is complete, and I'm having my editor look at it right now! I'm hoping to get it out on Kindle very soon, hopefully in the next month or so.
Until then, enjoy this mockup of a logo for a very hypothetical Blue Diver anime series!

This ties in to some of the origin of Blue Diver--a long time ago, I had a dream that I was watching a (nonexistent) anime series called Blue Diner, a slice-of-life sci-fi about humans and aliens living on a deep-space station and frequenting the station's diner. Also, giant robots were involved for some reason, because why not? It was such a vivid dream that it stuck with me for years afterward.
When I was trying to take some separate plot ideas and flesh them out into a novel-length plotline, my mind kept coming back to Blue Diner and I realized that, with some alterations, a lot of the stuff from that dream would work really well with what I was trying to do. The Lykoi and Cys were other elements from the dream that I was able to incorporate into the novel.
As for the title, Blue Diner didn't make any sense considering the plotline of the novel. But I realized that if I called the robot pilots "Divers", and made the main character's robot blue, I could call the novel Blue Diver!
I'm really looking forward to sharing this one with everybody!
Posted by T. Arispe at 1:58 PM No comments:

I've had a lot of writing-related stuff on my mind lately, as you can probably tell from all the essays. I've been sharing a lot of it on the blog because I'm hoping it will help other writers. Being an author can be an emotionally and psychologically complex experience. I hope that what I have to say will help writers in their journey of understanding how they relate to their work and their audience.
Recent occurrences have led me to the realization that I have been chronically stressed about my writing because I have been lacking confidence in my abilities as a writer. And I'm not okay with this, because at its core I love writing, and I don't think God gave me these creative talents as a source of stress; I think He wants me to fully enjoy what is supposed to be an enjoyable process. Laborious, yes, but enjoyable, not anxiety-inducing.
Read more »
Posted by T. Arispe at 9:27 AM No comments:

I've got a big surprise for everybody... I've gone ahead with production of the On Borrowed Wings audiobook! Once again, Benjamin Fife is gracing the audiobook with his awesome narration and voice talents. I've listened up to chapter 4 so far, and it's fantastic. I'm so excited to share it with everyone!
To celebrate, I thought I'd share an old character introduction thing that I did back in 2017, when I was writing the book! There's these things called "art memes" which aren't like the memes you see on social media; they're fill-in-the-blank questionnaires that you answer with drawings. I did quite a few back in the day, and this one happens to be about Jacob! 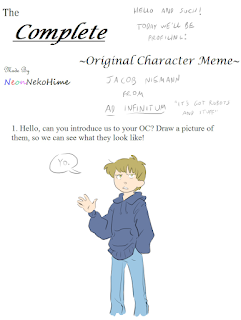 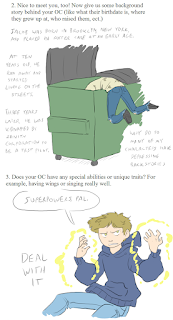 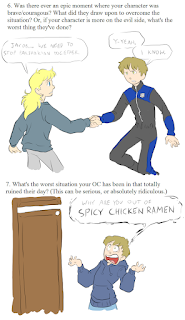 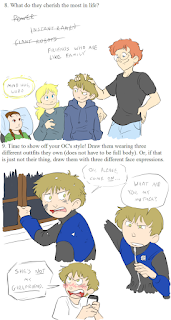 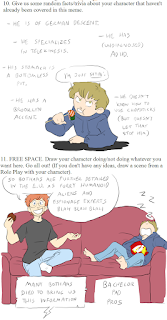 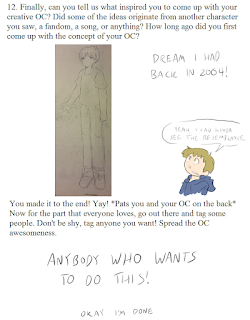 Note that because this meme was drawn before the book was published, there are a few discrepancies. One of the most obvious is that Ad Infinitum was the working title for the book; my editor convinced me that "Ad Infinitum", while cool and mysterious, is only vaguely relevant to the subject matter.
Ben is doing a super job making Jacob totally adorable. I hope listeners like him too! He is definitely the most dynamic of the main characters. And you can't go wrong with a Brooklyn accent! Especially coming from a squeaky thirteen-year-old.
Also, yes, Greg is a tremendous geek. He will go on like that for hours if you let him.
Posted by T. Arispe at 9:24 AM No comments: 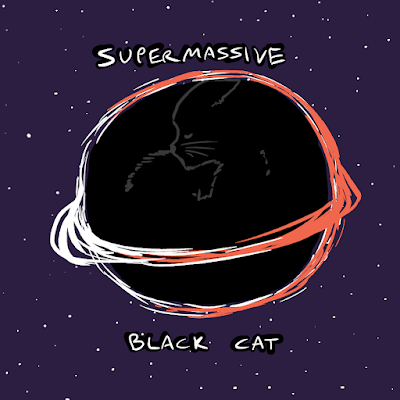 I know one of these lurks at the heart of my house, because everything there revolves around him.
Posted by T. Arispe at 10:33 AM No comments:

chairmen of the board 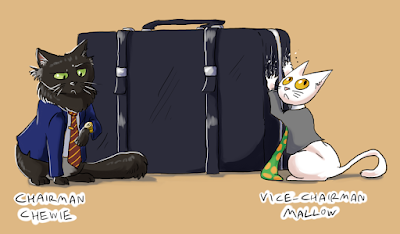 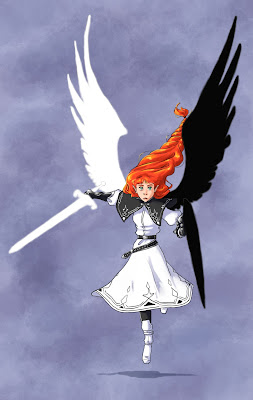 Did another illustration for the Christian sci-fi trilogy Zealot Finale! This is Gabriela; she was fun to draw because her aesthetic embodies a striking light-dark duality, offset by her brilliant red hair.
Posted by T. Arispe at 7:34 AM No comments:

Email ThisBlogThis!Share to TwitterShare to FacebookShare to Pinterest
Labels: art, character design
Newer Posts Older Posts Home
Subscribe to: Posts (Atom)
This is an all-ages-friendly blog! When you comment, please keep it that way!