I have been a bad, bad blogger during June, and I'm sorry. :( I got really busy with other stuff, like family visiting and the Altador Cup, and when I wasn't busy I just wanted to collapse and play Kingdom Hearts.

But I am going to take the plunge and write that NT series I've been brainstorming/outlining for a while! Also to make up for my absence last month, here are some concept sketches I've doodled for said series, which has a tentative title of "Shadow Play".

(Hopefully it doesn't sound like I'm a dark writer considering both this and my previous long series have had the word "shadow" in the title, but I feel like "Shadow Play" fits the themes of the story. Also the title probably sounds a bit cliche, but I did a title search in the Neopian Times and there is currently only one entry titled "Shadow Play", an ollllddd comic about shadow puppets. So I think I'm good there.)

Terra's outfit for the story, which takes place in Neopia Central in early spring, when it's nice and rainy. I am totally basing Neopia Central off of Manhattan and I don't even care. (To be specific, technology-wise I am basing it mostly off of turn-of-the-century Manhattan, so as to keep in alignment with TNT's vision for Neopia, but much of the overall atmosphere will resemble the 1920's-30's-40's, because that's my favorite. <3) 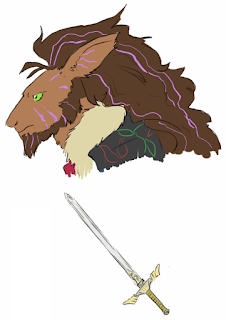 Another portrait of Zoltan because he's fun to draw. So glowy. And weapon design for a sword, because swords are an important part of life, and this plot will involve a sword. Did I mention swords?

Actually, I had a lot of fun researching sword construction for this story, because without spoiling too much, there's a point at which Hyren disassembles this sword to find the smith's signature on the part of the blade in the hilt. This is done in Japanese bladesmithing, but I'm not sure about Western bladesmithing. Buuuuuttt I thought the whole idea of finding a smith's signature on the tang (hilt part) of the blade was so cool that I had to include it. I'm a swordnerd like that.  (That's totally a real word that I did not just make up.)

All righty... I have to leave things purposely vague for now so as to avoid spoilers. :) But I will probably be making lots of notes and commentary during the writing process, so hopefully that will liven up this blog a bit more this month!