I CAN STILL ART I PROMISE

I did not realize how much fun I was going to have writing the Defenders of Neopia in this story. They're really growing on me! I'm really enjoying fleshing out their backstories, superpowers, and personalities. So I decided to do some sketches of the Defenders who have appeared so far. 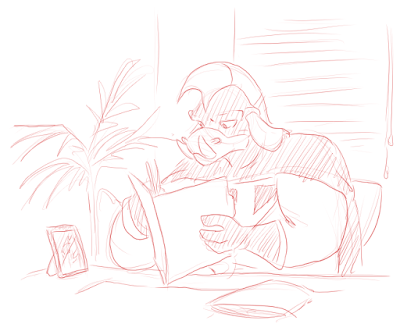 I imagine Judge Hog as a hardworking family man who does what he does to protect his wife and kids, and ensure the safety of everyone else's families as well. It's implied in this story that he founded the Defenders, and he is their stalwart and charismatic leader. He and Isengrim end up getting along really well, and Hyren can't find anything to dislike about him either. 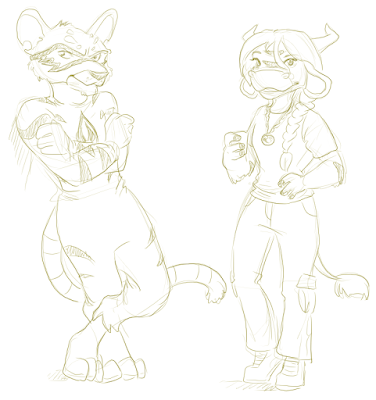 The Masked Intruder is, in my headcanon, a former master thief who turned his life around when the Defenders caught him, and now he uses his sneaking expertise to nab criminals instead of loot. He's suave and self-assured, but doesn't really enjoy small talk with civilians, who he sees as more annoying than anything else.

On the other hand, the Emerald Amazon (the unnamed Kau Defender on-site) is friendlier and more open to conversation. She's a former archaeologist who got her super warrior powers from the Geraptikan amulet she wears, and she seems to have transitioned well from going on digs to fighting crime. Terra and Blynn talk to the two of them while Isengrim and Hyren are discussing Malkus Vile with Judge Hog. 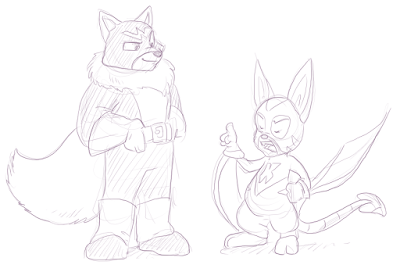 Nightwing is a bit of a smart-aleck who can be found manning the receptionist's desk in the lobby of Defenders HQ during the night shift when he's not on assignment. He's got a snarky comment for just about anything, and he lobs wisecracks at baddies along with his signature blue lightning. The protagonists met him when they had to return to Defenders HQ at 2:30 in the morning. You'll see why when you read the story. :)

Kourage Korbat (the unnamed Korbat Defender on-site) is an old-timer, a superhero who's been superhero-ing since before Judge Hog formed the Defenders. He's very by-the-book and isn't afraid to keep other people in line, which has earned him the title of "resident fussbudget", but he fusses because he cares--he's earnestly devoted to keeping civilians and his fellow Defenders safe. He and his wife are grandparents, and he will take any excuse he can find to show you pictures of his grandkids. He drives Hyren crazy, but everybody else is more patient with Kourage Korbat's overbearing ways, because who doesn't love a cranky old grandpa superhero? :) In battle, he can let loose his stupefying sonar to confound bad guys.

As you can see, I like to think that Neopets run the body shape gamut, and within most species (except Kikos and Jubjubs, I guess), individuals can vary as to just how anthropomorphic they are (for example, compare Kourage Korbat with Lord Darigan, or the Masked Intruder - who walks on his toes like Isengrim - with Lexora Browning, who walks on the flats of her feet like a human). It's all just part and parcel of the diverse world of Neopia. (And doesn't limit players who have differing ideas as to how anthropomorphic their Neopets are.)
Posted by T. Arispe at 10:21 PM