Concept art for the Giving Day two-parter I'm working on! (Calling a "series" makes it sound Important, but it's really just something that went past the short story word limit.) 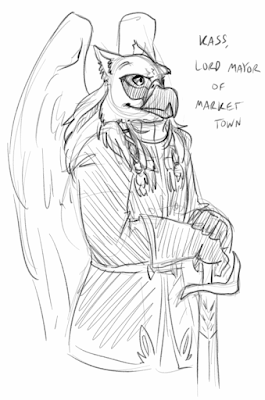 Spoiler alert: Due to my incurable habit of rehabilitating villains, Lord Kass is a) alive, b) a good guy now, and c) the new lord of Black Keep. He's been a really fun character to write--a lot like Isengrim at times, but less impulsive and with a more refined demeanor. I've been wanting to sketch him for a while, but my initial attempts didn't turn out so great because I kept forgetting what he looks like--unlike Isengrim, my interpretation of Kass actually looks like canon Kass. So I finally sat down with some reference images and turned out a good portrait of him. I based his avian features a good deal on condors, because I love condors. <3

If you look closely in this sketch, you'll see that he's wearing Pharazon's scarf. Best scarf friends are the best! 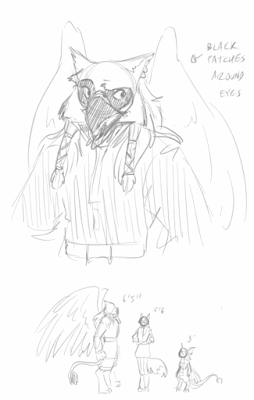 More Kass, and a height comparison among the three friends (although Kass should be somewhat taller based on the numbers). My headcanon is that those black patches are actually bare skin, the way a number of real bird species are featherless around their eyes. I think that would give him even more of a somewhat odd, sinister appearance, as befitting a Draconian.

Also, in this story it's firmly established that Celice is a member of the Brightvalian nobility. In a couple of my earlier series, other characters call her by the title of "Lady", but I didn't really think much about it until I was formulating the plot for this story. Just goes to show how sometimes small details that pop up in your writing, and you don't quite know why they're there but you just decide to roll with it, can serve as inspiration in the future. :) 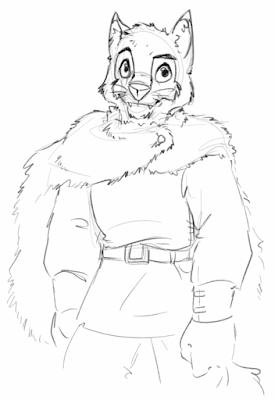 And then we have Connor in his winter wear! When you already have thick fur, and then you pile more fur on top of that, you never get cold. I tried to make his design distinctive from other Werelupes by giving him younger features and having the fur on his head stick up in a constant state of disarray, because he's too busy science-ing to care much about his appearance.

It's been fun writing Connor again, even if he's not nearly as central of a character as he was in his debut. I like the relationship between him and Isengrim, where Isengrim is somewhat fatherly but also regards Connor as a brother, a fellow clansman, and the two have a special bond by virtue of both being Werelupes. Connor's still trying to adjust, but he's much more accepting of his situation and able to embrace the bright side of things than he was at first.
Posted by T. Arispe at 10:45 AM