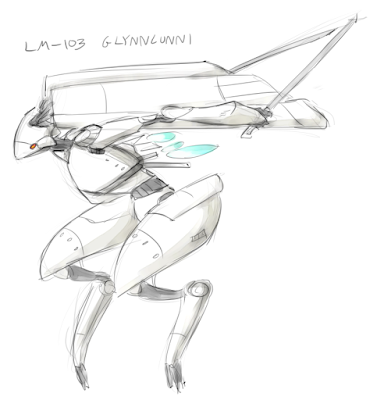 Okay, I knowwwww everything is about Thunder Girl right now, but I couldn't help doing some concept sketching for my next novel!

This is an LM (Light Model)-103 Glynnlunni, a PT built for speed and agility in melee combat. The inertial stabilizing fins on its head allow its pilot to perform all sorts of acrobatic feats in space, the environment that the Glynnlunni was developed to perform best in.

Props if you know where I got the name. 😉

In Blue Diver, space pirate Kee Kitwhit pilots a Glynnlunni armed with two wakizashi (Japanese shortswords). She's decorated her unit with some sporty detailing, not shown here, but I may do an edit of this image to include her customizations.

Kee is a Gizmim, a species of cute but hyperactive vaguely vulpine aliens. She's a friendly person, but her off-the-wall personality tends to grate on the nerves of more serious sentients, and Gizmim generally have difficulty fitting in to the dignified demeanor of the Challinorean Empire. Kee turned to piracy because Captain Jahaira Vorrh specializes in taking in misfits and refugees and giving them a home and a purpose on her pirate ship. It might take a newcomer to the galaxy to convince the captain that you don't have to use crime to help outcasts find a place they belong.