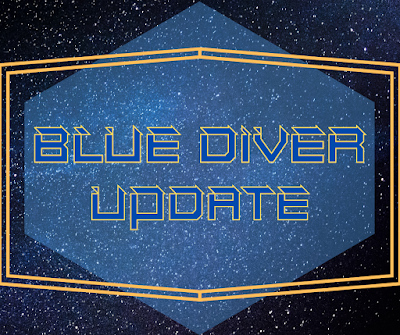 Figured an update was due... I've started working on the first draft of Blue Diver! So far it's so incredibly super fun, and I'm enjoying it every bit as much as I hoped I would. Which is really my permanent writing goal after the health-crisis debacle that was NaNoWriMo 2020. Never again.
From now on, no pressure. No deadlines. No needing to write a certain amount in a day in order to feel productive. I'm just going to write when I want, and let myself have the time to rest that I need.
And lest you think this is turning me into a procrastinator--I've written 16,000 words in the manuscript and I've only been working on it for a week. In a welcome twist of irony, trying not to be so productive has made me more productive beyond my wildest dreams.
I told myself I would get back to enjoying my job. I think I've achieved that.
As far as the actual story, it's fun times all around! The characters are extremely fun to write: nice-but-slightly-snarky test pilot reject Auva Cameron; disgruntled and conflicted alien police officer Renny Gallahan; sly but kindhearted space pirate captain Jahaira Vorrh and her quirky crew; hyperactive rabbit-thing Kee Kitwit; and kindly bookworm gorilla-crocodile Mireya Golm.
Also, it's been fun writing a girl-powered giant robot space opera--like My Little Pony: Friendship is Magic in space! With giant robots.
Really excited to share this one with everybody! I'll keep hacking away at it... on my own time, of course. Which means, evidently, an inhumanly feverish pace.
I'll allow it.
Posted by T. Arispe at 1:01 PM