I'm going to start working on Blue Diver very, very soon, and I'm so excited to have fun in this world and take you guys on a wild galactic adventure! Until then, here's another mech design! 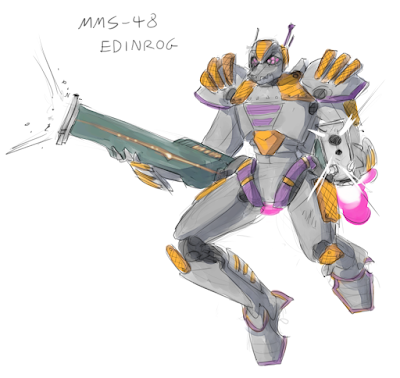 The MMS (Mixam Mechanics Special)-48 Edinrog is a specialized heavy artillery and defensive PT commonly used in the Challinorean Space Navy in some sectors. Edinrogs sacrifice speed and maneuverability in return for raw power and sheer tank-ish-ness. Common armament for Edinrogs is a pair of hip-mounted railguns, as shown here.
In the book, space pirate Mireya Golm pilots an Edinrog that she stole from her world's military when she deserted the Navy for personal reasons. She doesn't particularly enjoy being a pirate, but she also hated being pigeonholed by her society and forced into a job she didn't want. Hopefully somebody can help her and her crewmates resolve their issues...
In contrast to the Glynnlunni, I went a little more "traditional" with the Edinrog, trying to evoke the aesthetic of a very function-over-form military design that's not at all trying to be sleek or graceful, just trying to get the job done with no fuss and no going outside the box. It fits well with Mireya's society and the reasons she abandoned it. Despite this, the Edinrog was what she learned to pilot in the military and it does work well with her personal combat style, so she's kept it.
Posted by T. Arispe at 4:12 PM