Worth Fighting For, Chapter 8 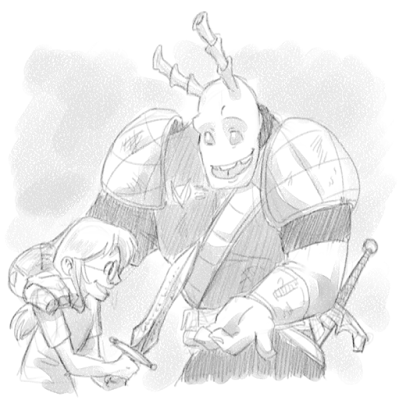 They trekked through the vast subterranean city for hours without stopping, following the flickering flames of the little fire mote. At times Hyren entertained his companions with more stories of his interstellar exploits, while Blynn and Terra amused him with their anecdotes about life on Neopia. They passed through vaulted halls covered in murals depicting lavish scenes of celebration, rooms where decaying furniture sat under a thick draping of cobwebs, and corridors whose walls were inlaid with precious metals in the shape of maps of the night sky.

Terra, however, kept looking around anxiously as though she expected to see windows somewhere. None ever appeared, and it seemed they were still deep underground. Hyren had to admit that even he was tired of it now.

Finally they reached a room with a few scattered tables and benches pushed against the walls. It had probably once been a dining area, Hyren inferred by the presence of toppled storage urns, scattered ceramic dishes, and the large, open-air fireplace on one wall. “Let’s make camp here for the night,” the Grundo said, setting down his bundle of weapons. “Oh, how nice. They left us enough fuel for a fire.” He pointed to the meager stack of chopped wood next to the stone hearth.

Blynn dropped her pack and set the lantern on the edge of the fireplace. “Don’t worry, little guy,” she said to the fire mote, “you’ll have some fun soon! Terra, help me out, here!”

“Oh—can’t we keep going?” Terra asked. “We must be almost out—right?”

Hyren looked over at her, remembering their conversation the day they had met. He didn’t like seeing her like this, but they were all exhausted. “You need to keep up your strength,” he said, “and walking all night without sleep won’t cut it.” He sat down on the hearth, massaging his sore feet. “I said I would protect you, remember? I know it’s claustrophobic in here, but I bet you can make it one more night.” He smiled at her. “You’re brave like that.”

Terra looked disappointed, but nodded. “O-okay,” she said as she eased her pack from her shoulders.

“I think we’ll reach the surface tomorrow,” Hyren said. They were very close, he knew it. The faint whisper of air he had first detected under the throne room had steadily grown into a perceptible draft, cold and dry. He wouldn’t be surprised if they’d see daylight tomorrow.

Terra nodded and turned to aid her Neopet in lifting firewood. Blynn shot him a look over her shoulder that Hyren couldn’t quite decipher. It was questioning and suspicious and just made him feel worse about his indecision regarding their fate.

The two girls built a stack of wood on the metal grating, and Blynn tilted the open lantern over it once they were done. “Come on out, little fella,” she said.

The fire mote rolled out onto the stack and blazed up anew, nestling itself into the wood which began to smolder. Soon they had a roaring fire, perfect for staving off the eternal cold of the subterranean city.

“Where d’you suppose it goes?” Blynn asked, watching the smoke twist up the stone flue.

“Out on the side of the rocks somewhere,” Hyren said as he sat with one knee raised and his elbow propped on it. “No sense in a fireplace without a proper ventilation system.”

“How far do you think we’ve come?” Terra asked, setting up her bedroll nearby.

Hyren cast his gaze at the dark hallway they’d come from and said, “Pretty far. I wonder which direction we’ve been traveling in.” Too bad his helmet was nonfunctional, as the HUD included a compass. He figured the girls had a magnetic compass, but they’d taken so many twists and turns by now that just knowing where north was wouldn’t be much help. “Maybe we’ll end up back in the Lost Desert.”

“Or on the other side of Neopia,” Blynn said, staring into the fire. “I wonder what’s there. Probably some super awesome things, stuff we can’t even imagine!” She spread her arms wide.

Dinner was brief, partly because they’d had a large lunch and partly because Terra barely ate anything, even at Hyren’s and Blynn’s coaxing. To try to keep her mind off of her situation, after dinner Hyren began teaching her the very basics of swordplay. “We’re going to start with some stances and types of actions for now,” he said, pacing around her with his arms folded.

“Okay,” Terra replied as she pulled her blade from its sheath and held it in front of her.

“You’re right-handed, aren’t you? You want your right hand on top,” the commander explained as she switched the position of her grip on the hilt. “Good, good. Remember that the dominant hand guides the strike while the other provides leverage. It’s basic physics. Oh, and bend your knees, there you go. Keep your weight on the balls of your feet, be ready to move at any moment.”

Once Terra had gotten the hang of the ready stance and some rudimentary blocks, parries, and strikes, Hyren began using his own sword to spar with her, very gently and very slowly, just so she’d get used to the rhythm of swordfighting and begin to understand the strategy involved. As this ponderous kind of practice was a no-brainer for him, he noticed Blynn picking up small potsherds and storing them in her belt pouch, and then shooting them at a spot on the wall she’d carved a small X into. She was a disconcertingly good shot.

A sudden impact on his forearm bracer brought him back to the task at hand, and he looked back at Terra to see her clutching her sword close. “Oh no! I’m so sorry, did I hurt you?” she asked, chewing her lower lip. “I think I got carried away…”

“What? No,” Hyren said with a laugh, inspecting the bracer. There was a new nick in it, but she didn’t have enough strength to actually injure him. “I’m fine. I should have been paying attention—you saw the opportunity while my guard was down.”

She stowed her blade and nodded, not looking fully convinced. Her eyes wandered down to his foot. “Is your leg okay?” she asked.

Hyren glanced at it. He’d forgotten it was even injured. “Yes, it’s all better now,” he said. “I heal fast. Don’t worry about it.”

“Okay… good,” Terra said. She hesitated a moment before taking a deep breath. “You know… I’m glad we met you.”

Hyren stared at her incredulously. He wasn’t sure what to say, but before he could stop it, the truth came to the surface. “I’m glad I met you, too,” he said.

His statement was punctuated by a loud snap as Blynn’s latest shot hit unusually far from its target and closer to the commander’s head.

Hyren quietly piled more wood around the fire mote, who seemed quite content at being out of the cramped lantern for a while and in the midst of a real blaze. Terra and Blynn had fallen asleep to the commander’s stories again, and now the Grundo could feel himself starting to wear down as well. Letting out a yawn, he eased himself to the floor, taking off his helmet and laying his head on his thick arm, alone with his thoughts for a while.

He didn’t have to take them with him. No one had to know.  Surely Sloth would understand. Or would he? Sloth was not known for his compassion or forgiveness, not even to his highest-ranking officers. Hyren had yet to fail the overlord, and Sloth might already be upset over losing the Battle of Sakhmet and failing yet again to conquer Neopia. Garoo probably spun things to make it sound like Hyren’s fault. Hyren might have to regain his credentials somehow. But could he really bring himself to do that to these two?

Well, so much for being alone. Hyren rolled over to see the Zafara staring at him from on top of her sleeping bag, sprawled out on her back with her paws folded behind her head.

“Seriously, I feel like my fur is singeing,” the Zafara said, scratching her belly.

“Can’t sleep,” Blynn said. “I’ll have to wait until the fire dies down again. You’re spoiling that mote, you know. It won’t wanna go back in the lantern.”

The commander watched her for a moment. “I think I like you better when you’re not intolerably zany,” he said.

The Zafara looked over at her owner. “I try to keep her laughing,” the magenta Neopet said. “She worries too much and it makes her sick sometimes. I don’t wanna see the worry in her eyes.”

“You’re a lot smarter than you let on,” Hyren said.

She grinned and said, “Yeah, that’s the idea.” Terra shifted in her sleep and the two paused to see if she would wake up. When she didn’t, Blynn turned back to Hyren and said, “She’s not stupid either. She’s just nicer than me.”

They were both silent for a while, listening to the fire crackle. Then Blynn shifted onto her side, propping up her head in her hand and letting her tail loll back behind her. “I think I’ve been jealous of you this whole time, Hyren,” she said. “I’ve always been an only pet. It’s weird seeing Terra give someone else attention.” She traced abstract designs in the dusty floor. “She’s really fond of you, you know.”

She brushed away her patterns and said, “You don’t really want to take us to Sloth, do you.”

He swallowed hard and looked away. “When it comes down to it,” he said, “my job is what matters most. I can’t betray everything I am for people I just met yesterday.”

The Zafara grabbed her long toes, rocking back and forth. “Did Sloth send you specifically to get test subjects?” she asked.

“Well, no,” Hyren said. “I don’t think he knows if I’ll ever return. Thanks to one of my backstabbing fellow commanders, Sloth probably thinks I’m dead.”

Hyren rolled over so he was facing the wall. “Go to sleep, Blynn,” he said. He heard a sigh and the rustle of a sleeping bag. Truth be told, the idea of staying behind on Neopia himself had snuck into his mind several times lately, but he was not about to let either of them know that. He couldn’t give up everything he had built for himself out in the cosmos, could he? And he still wasn’t about to betray the man who had given him all of this strength in the first place.

Not to mention, the overlord’s words from the day he had mutated Hyren still echoed in the Grundo’s memories. It would not surprise Hyren if Sloth did have some way, somehow, of retaliating against Hyren if the commander were ever to renounce his loyalty. It was not really something Hyren wanted to test.

Blynn’s voice cut through the silence again. “Just so you know,” she said.

Her tone was serious enough to make him twist around. She glared at him, her deep blue eyes suddenly hard as ice and her paws clutching the edge of her bedroll. “Terra’s my best friend in the whole world,” Blynn said. “I swear I’ll never let anything happen to her. I’m watching you.”

The commander paused for a moment, then nodded and turned back over to escape her piercing gaze. It was evident now that she took her job just as seriously as he did his. He just hated that their two jobs had to be in conflict.