Worth Fighting For, Chapter 16 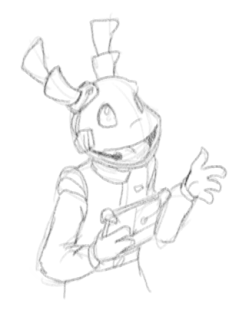 They emerged from warp, and the first thing Hyren saw was the Triumph blotting out the stars, a gleaming behemoth of a command ship covered in lights and bristling with armament. Its hull contained wide swaths of windows, many of them lit. The Triumph carried the population of a small city—including countless test subjects in its depths. All in all, the vessel couldn’t help but command respect, Hyren thought. He wondered what Blynn’s and Terra’s reactions would have been to seeing it from the outside.

They were headed for a different view, though.

“This is the Artful Xepru, requesting docking,” Sophix said to the ship’s comm system.

Sophix scowled and said, “You mispronounced ‘You’re getting a big bonus for that, Sophix.’” There was silence on the other end and she threw up her hands. “Ugh, stingy. Am I right?”

“You’re a mercenary, not a commanding officer,” Hyren said. “There’s a large difference in pay rate.”

“At least I’m not the one who got lost planetside for eight months,” Sophix said.

“Oh, yes, just imagine what that would have done to your hair,” Hyren said.

The Aisha clutched her long locks defensively. “You leave my hair out of this, you lout,” she said.

Inside the hangar was a bustle of activity Hyren remembered fondly, a mix of robot Petpets milling about and Neopets typing on holopads as they hustled to their next assignments. Large screens on the walls displayed scrolling feeds of timetables and diagnostics of all the craft in the landing bay. Occasionally, commands and information boomed over the loudspeakers.

Sophix brought the Artful Xepru down as Hyren went to fetch his “prisoners” from the hold. “Okay, keep quiet and do as I say,” he whispered as he deactivated the force field and handed their packs to them. He knelt down and scooped them into his arms for an all-too-brief moment. “I have a plan.”

Just as the mercenary emerged from the front of the ship, Hyren picked Blynn up by the scruff of her neck and put his other hand on Terra’s shoulder. “Sloth will enjoy experimenting on you pathetic creatures,” he snarled, bringing them down the gangplank.

“And I’m going to enjoy my paycheck,” Sophix said, walking past him into the hangar and giving him a curt wave over her shoulder. “I’m off to the cafeteria for a milkyway shake.”

Hyren squeezed Terra’s shoulder affectionately. “Get an eyeful of this place while you can,” he said. “It’s really pretty amazing. Space Station Number Four, the one orbiting Neopia, doesn’t hold a glowrod to the Triumph.”

“Yeah, I believe it,” Terra said, craning her neck as she looked around.

The commander snorted loudly, signaling that he was entering professional mode. “I hope you’re ready to meet his Supreme Overlordship,” he said.

“I’m ready to give him a good kick in the face,” Blynn said, folding her arms.

“Commander, sir!” A familiar voice caused Hyren to turn around. A yellow Grundo wearing a Virtupets uniform scrambled toward him, wide-eyed. “It’s wonderful to have you back!” the little communications officer said.

The mutant Grundo looked the smaller member of his species up and down. “Hello, Reebitz,” he said. It had been a while since he’d seen Dothan, but nothing about the guy had changed.

“I must say, your survival after the invasion of Neopia is the stuff of legend!” Dothan said. “Everyone on the ship is already talking about it!”

“Uh-huh,” Hyren said as he steered Terra toward the doorway leading to one of the ship’s many corridors.

“I would really like to hear more about it when you get the chance!” the communications officer said, trailing after them. “You know, sir, you’re a real inspiration to me!”

At this, the commander turned around and stared him down so coldly, Dothan visibly flinched. “Well, I shouldn’t be,” Hyren said. Lips thin, he continued walking, a Neotrak beeping in apology as it swerved out of his way.

“Is—is there anything I can get for you, sir?” the yellow Grundo asked from behind him.

Hyren sighed and glanced back at the officer. “Why do you work for Sloth?” he asked.

They reached the lift and the commander leaned against the doorframe as he waited for the car to reach their level. “What’s keeping you working for Sloth?” he repeated. “Why do you think it’s so great?”

Dothan scratched the side of his face. “Because… because Master Sloth is strong,” he said. “And you’re strong.”

“I’m not particularly strong, Reebitz,” Hyren said. “I just know how to get a job done.” The lift door opened and Hyren escorted Terra in. “But if there’s any reason why you should idolise me,” he said to the officer, who remained outside, “it’s because I’ve learned to think for myself and trust my gut.” He keyed in the level he wanted and deposited Blynn on the floor as the door slid shut, separating the three of them from Dothan’s look of confusion.

Blynn rubbed the back of her neck. “Sheesh, I know how to walk,” she said. “What was with him? Talk about a sycophant…” She glanced up at Hyren, who remained stoic and silent. “You doin’ okay, big guy?”

Hyren let out an irritated snort and made the slightest gesture with his chin toward the security camera in the corner.

They rode up and up, slowly approaching the command deck. Occasionally the lift would stop to let in a Neopet or two, or a robot Petpet. Hyren and his companions got a few curious stares, but none of the Virtupets workers said anything, and the ‘bots seemed to disregard the presence of organics entirely. None travelled more than a few floors before disembarking.

“There sure are a lotta robot Petpets here,” Blynn said during an interval when they were alone. Hyren remained silent, one hand on the hilt of his sword and the other on his blaster. He would have loved to give the girls a more congenial tour, but now wasn’t the time.

“Well, Virtupets probably built a lot of the ones in the Space Station shop,” Terra pointed out. “It doesn’t surprise me that there would be even more further out in space. They seem pretty useful.”

The doors opened again and a Cuttlebot floated in, warbling electronically and swerving toward the control panel beside the door. The panel’s digital display changed to read “Gamma 34”, five levels up. The Cuttlebot then settled its mechanical tentacles together and positioned itself in front of the three, watching them with blank blue eyes as the lift resumed its ascent.

“I haven’t seen that one at the Robo-Petpet Shop,” Blynn said. She reached out and poked the ‘bot’s black casing, causing it to bob gently in midair. The Cuttlebot’s eyes flashed and it curled its tentacles, letting out an annoyed whistle and drifting away from her, nearer the door.

Hyren sneered. “Pitiful Neopians,” he said. “Of course you would be curious about the highly advanced technology you keep resisting in your pathetic attempts to stave off Sloth’s forces.” Terra glanced up at him and he winked down at her.

She watched the Cuttlebot as the lift reached level Gamma 34 and the ‘bot slid out into a busy corridor. The doors closed again and Terra stood back, kicking at the metal-plated floor with the toe of her hiking boot. “I mean… I’d think it was cool if I wasn’t a prisoner,” she said. “Yep.”

“We’re almost there,” the commander grunted out of the corner of his mouth. He hardened his features, staring straight ahead at his stony reflection in the polished doors. His mind was in turmoil as he ran over his plan again and again, trying to smooth out every wrinkle and account for every probability. This would work. He would make it work.

The lift stopped, the console display reading “Command Bridge”. As the doors parted, Terra and Blynn stiffened. To Hyren, the sense of foreboding was almost palpable. This could go right—or it could go very wrong for them all.