First off, some writing news! I finished painstakingly combing over the latest draft of Thunder Girl, and I've sent it off to my proofreader! She usually works pretty fast, so we should be done with that round of editing pretty soon. After that, the next big hurdle is the cover illustration! I feel very unqualified to draw Mosasaurus skeletons, but I'll try my best!

Also, thought I'd share a bit of concept art I doodled for the novel I'd like to work on after this one: 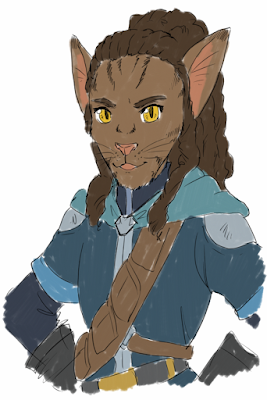 This is the leader of the thieves' guild in a cutting-edge virtual-reality MMO, and the captain of those who choose the job path of the rogue. She amasses a large fan following among players of the game, many of whom play as rogues just because of how cool their leader is, much to her bewilderment and exasperation as she'd prefer to keep a lower profile. Although she struggles with having double standards when it comes to social ethics, she's a good person beneath it all, and when things in the game start to go haywire and affect the real world, she's right there working with the player characters to set things right.

Finally, I've been tossing around ideas for a sequel to Skydwellers! I only like to write sequels when I have solid ideas for sequels, and in this case I think I've got a pretty fun idea. It takes place five years after the events of the first book, and involves a teenage Kieri and Miette uncovering some incredible long-lost secrets about the unusual world they live in, including an explanation for the Aether Sea and the origins of the civilization that constructed the aether weapons. By this point I think Fraa would be officially retired from journeywoman warrior business - in part because her friends worry about her - but she is currently training her young nephew who wants to engage in the same line of work.

Anyway, this is all super tentative, and I have several other novel concepts that I'd like to work on first, but this was an idea that I got super excited about when the inspiration struck, so I think it will come to fruition someday. :)
Posted by T. Arispe at 10:05 AM