More "Worth Fighting For" is coming, but first I wanted to share some doodles I did of the main characters in this upcoming novel! My editor should be getting back to me soon and I'm super excited! Also, apologies that the art is a little wonky, but I'm kinda rusty because I've been busy with other things. Like writing. 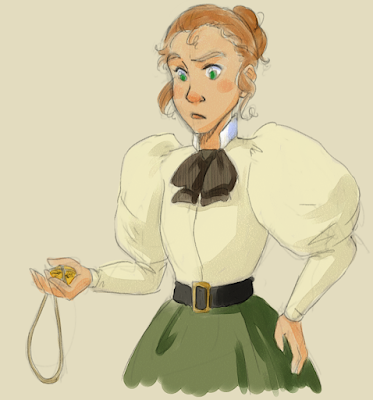 Catherine "Cat" Clauson is an anthropology student at Columbia University who is currently on a summer internship at the American Museum of Natural History. She's very rational and no-nonsense, traits that do not serve her well when she suddenly finds herself in possession of a magical Native American amulet that reanimates fossils.

Cat was fun to write because I intentionally made her not so much like me, personality-wise. I've already written plenty of main characters who I can relate to better, so I wanted to break out of that and write a heroine who's outspoken, kind of pushy, hates the idea of anything outside the realm of scientific fact, and dislikes adventures. But she means well, and beneath it all she's a good friend when she opens herself up to the possibility. 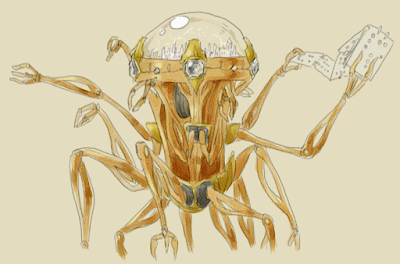 Hermes is a Cooper-Rutherford Automatonics 84-C2 administrative mechanoid in the service of the Museum's paleontology department. As such, he has developed a keen interest in the subject and is like a little kid who loves dinosaurs... i.e. me as a child. Friendly, excitable, and a little naive, Hermes has absolutely no problem with the idea of magical amulets that reanimate fossils--in fact, he's overjoyed that now he can finally see how prehistoric animals moved in life. But also he's distraught that he can't actually tell anybody because they'd never believe him.

I enjoyed making the mechanoids in Thunder Girl thoroughly non-humanoid, because honestly I think humanoid robots are boring, and most robots in real life - unless they're specifically engineered with human-like builds - are actually built in an optimal configuration for their job, which means they usually end up looking nothing like humans. Hermes's physiology was inspired by octopuses and myovirus bacteriophages. The other mechanoid characters are equally alien-seeming; Ceres, for example, is an agricultural model who looks like a giant centipede with enormous clawed upper appendages. I just love the idea of never judging anything by its appearance, and I don't think something has to look "cute" or human-esque to be sympathetic and an engaging character. 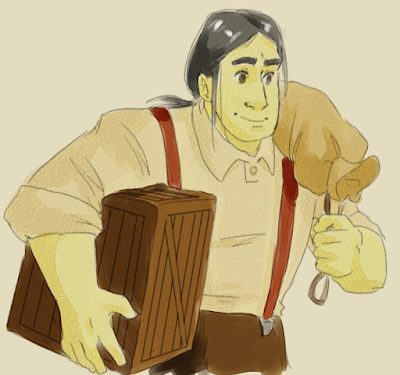 Iapetus is a freakishly strong giant of a young man who works as a strongman for a traveling circus, although he loves to write and harbors dreams of becoming a published fantasy author. He's shy and insecure because of his appearance and physical stature, but is kindhearted, a loyal friend, and wise beyond his years. Also he is probably not human, but no one seems to know quite what he is. Well, Iapetus knows what he is, but it's not information that's usually safe to divulge.

Out of all the cast, Iapetus is probably most like myself. I think he makes a good foil to Cat, who can be sort of close-minded and short-tempered, while Iapetus is more emotionally even-keeled, diplomatic, and apt to look at the bigger picture and examine things from multiple angles. He also developed an unexpected dynamic with Valéry, and the three of them ended up being a lot of fun to write. 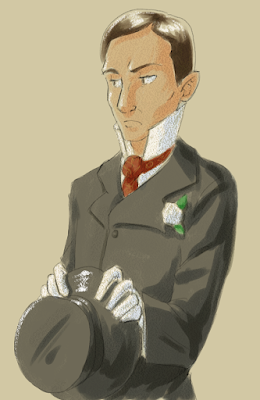 Valéry du Bois is an enigmatic railroad tycoon from France who came to the United States to expand his company--including building the first transcontinental railroad across the Native States in the center of the nation, something that has created much controversy among the tribes. He suspiciously arrives at the Museum to inform Cat that the amulet is cursed and offers to take it off her hands, but she doesn't trust him one bit and refuses, sure that he has ulterior motives.

I can't really say too much more about Valéry without giving away major plot spoilers, but he was a lot of fun to write. I just hope his character arc comes across okay, but I'm sure that's something my editor will help me with.
Posted by T. Arispe at 11:14 AM