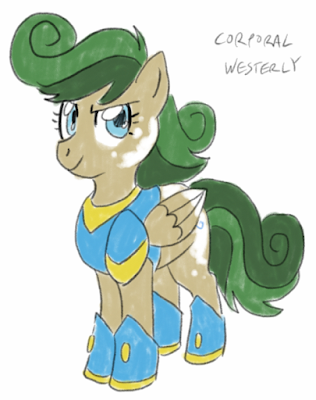 Guess who's working on another My Little Pony fanfic?! And this one actually features the main characters of the show this time! It takes place sometime during season 7, to be precise. While I won't spoil too much, it's about the MCs (the Mane Six plus Spike and Starlight Glimmer) journeying to Daybreak and meeting Princess Radiant Dawn. By this point, Prince Ironclad has built up an army of pegasi in order to defend the kingdom and his wife, and Westerly here is in charge of a squadron of border patrollers. The westerlies are mid-latitude winds that circulate closer to the poles than the equator, so I had fun giving the corporal a bit of an alpine theme.

Writing the main characters from the show has been really fun--their personalities are all so well-defined that they have strong interpersonal dynamics, and it's easy to gauge how they'll react to most situations.

Email ThisBlogThis!Share to TwitterShare to FacebookShare to Pinterest
Labels: my little pony, writing