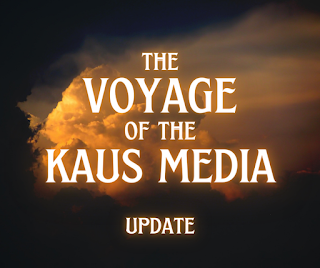 I'm very pleased to announce that my revision of The Voyage of the Kaus Media is done! I actually ended up whacking off about 10,000 words, so I wanted to talk a little bit about what's changed this time around.
Most of my edits are strictly prose-related. The book came out in 2019, and it turns out I've actually improved as an author since then (go figure). I'm not trying to be OCD about revising my work, but when I re-read something and just start cringing, I know I need to take action. I want my books to be the absolute best they can be, and I would feel ashamed of offering something for sale that wasn't the highest quality I can manage.
One of the big things I did with this revision is to take out a lot of Angela's inner monologue. When I was revising the manuscript the first time around, I tried to be extra conscientious of making sure the reader constantly knew what Angela was thinking and feeling about everything. Turns out, not only is that not actually strictly necessary, but in reading the novel again, I felt that all of this discussing her thoughts and feelings was really bogging down the pacing for me. Plus, there were numerous times when it just became repetitive to the point of redundancy--do we really need to be reminded in every chapter that Angela misses her family, is grateful for her friends, etc.?
Now, don't get me wrong, I'm not saying I got rid of all the inner monologue. But there is definitely such a thing as too much of it. Angela is a complex character who undergoes a great deal of personal growth over the course of the plot, so there are definitely times when I needed to discuss what was going on in her head. But the rest of the time, I can let her dialogue and her actions do the talking for her, and trust that the reader can fill in the blanks. Plus, I think it helps that I made sure to really establish at the beginning of the book what kind of person she is and what her background is, so that her actions and reactions are not as enigmatic to the reader.
Another thing I did was carefully reexamine my use of dialogue tags, and remove them when necessary. It's my rule of thumb that if a paragraph starts talking about one character, and doesn't mention any other characters, I generally don't need a dialogue tag in that paragraph; it's understood that everything in the paragraph is pertaining to that character. So that probably got rid of about 7,000 words right there.
For the most part, the story is exactly the same; I did slightly alter some tidbits here and there, but it was mostly for increased plot clarity. The plot did get one major alteration (mild spoilers ahead): during the battle at Viper's Pass, in the previous version, Captain Saixaphas asked Angela to stay on the command bridge because her powers might be useful in the battle. In this new version, Saixaphas wants her to go back to her cabin, but Angela insists on staying in case she's needed. I really wanted to hammer home just how much she changed after her experiences in Elrath, how it became the turning point for her being more proactive and really believing she could make a difference.
I've handed the manuscript over to my editor, and hopefully very soon it'll be up on Amazon. I'm looking forward to bringing VotKM up to speed with my more recent work!
Also, now's about a good a time as any to mention that updates may be a little scarce for a while. I have a lot going on, and I'm just plain tuckered out from Blue Diver, so I think I need a vacation. I'm still hoping to get started on my next novel sometime this year, but for now I need some R&R. Catch you later!
NEXT-DAY EDIT: Okay, I added one more substantial change to the plot that I think a) really makes a lot of sense and b) gives the Ulo part of the plot some nice closure. I won't give away any spoilers, but if you're a fan of Ohmi, now she gets her due. :)
Posted by T. Arispe at 5:00 PM

Email ThisBlogThis!Share to TwitterShare to FacebookShare to Pinterest
Labels: books, the voyage of the kaus media, updates, writing