I finally finished this portrait of Kee Kitwit, one of the main characters of Blue Diver! I've been working on this piece off and on for the past month or so; I'm still working on the first draft, don't get me wrong (53,000 words and almost to the climax!), but I've had times when I've been at my computer with not much else to do but draw, and not enough brainpower to write.
Now, though, it's finally finished and ready to share! Kee's been awfully fun to write. I hope readers like her too! 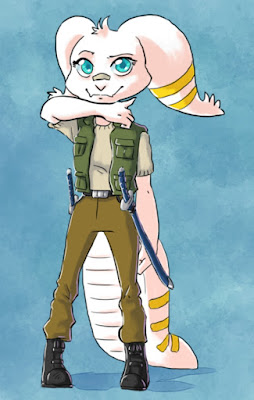 Don't let her cute appearance fool you--Kee is a dangerous space pirate and part of the feared crew of the ship Sledgehammer. Whether in hand-to-hand combat with her two wakizashi, or piloting her agile LM-103 Glynnlunni, Kee is a force to be reckoned with who will make a mess out of slower opponents.
Kee is a Gizmim, a species in Challinor who are widely regarded as annoying and childish because of their tendencies to be energetic, casual, and fun-loving. Kee wanted to be a physicist, but was rejected from universities because none of them would take her seriously. Piracy was the only good job she could find.
Except it's not a very good job. Kee doesn't particularly enjoy making a living plundering other spaceships, but she just doesn't see any place for herself in a civilization that prides itself in its maturity and seriousness. During the storyline of Blue Diver, however, she meets an unusual friend from a strange place called Earth, who convinces her that no matter how outcast you feel, there are better ways to deal with it than becoming an outlaw.
Posted by T. Arispe at 8:36 PM