I did some doodles for Blue Diver! I've had these characters rattling around in my head for the past few months and just needed to get them out on paper! FYI, I'm about 33,000 words into the first draft and it's looking awesome so far! 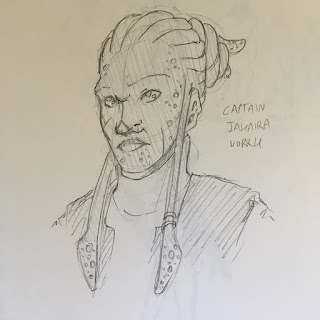 Jahaira likes to describe herself as the biggest, baddest pirate in Challinor. This is a bit of an exaggeration, as her crewmate Mireya is bigger (as seen on the height comparison chart in the next image). :) Jahaira is cocky, arrogant, and flippant, and has serious issues with the Challinor Empire... but she's also a good person deep down, and she does what she does in order to take care of her crew of misfit outlaws. She considers herself a champion of the offbeat underdog, and if she finds out that anyone is suffering because they're different, she becomes a surprisingly caring and protective person. She's been a lot of fun to write. 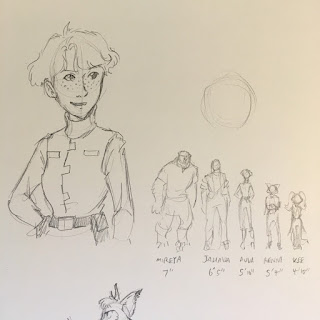 Height comparison chart for the main characters, and portrait of Auva! FYI, this never gets mentioned in the story, but Auva is from St. Catherines, Ontario, a city near Niagara Falls and part of the greater Toronto metropolitan area. But that's totally irrelevant to the story because it mostly takes place in another galaxy. :) 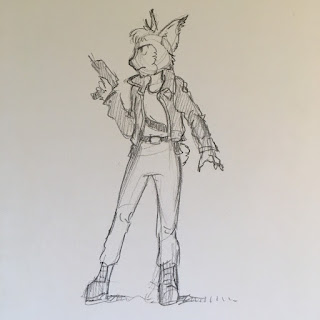 And Renny being epic! She's been a lot of fun to write, and she's probably one of the most complex characters in the book. She, Auva, and Jahaira have a good dynamic going, because Auva, being an unattached third party to the socio-political conflict happening in the galaxy, is able to be a good mediator between Jahaira and Renny when they get too lost in their own opinions to be able to communicate civilly. Will Renny ever figure out her mysterious past and clear all suspicions that she's a spy? You'll have to read the book to find out! :)
Posted by T. Arispe at 1:45 PM