Blahhh it's been a super long time between posts and I'm sorry! :( I am trying really hard to finish this Neopets fic so I can move on with my life and start writing that next novel, but life keeps getting in the way. It's almost done, though! It's at nearly 30,000 words and we're coming up on the big climax. And then I'll have finally felt like I've sent my Neopets cast off fondly.

But in the meantime, the other day I did something I haven't done in ages and sat down and just doodled! Here are some of the results (click for larger size). 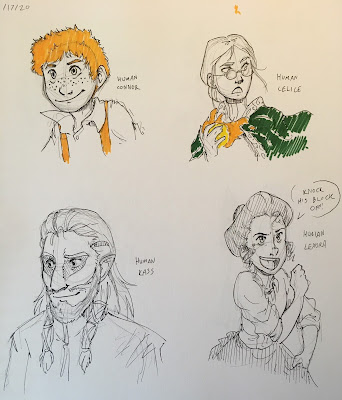 Sometimes I like to doodle human versions of my Neopets characters! Purely to play around with character design and see what they would look like as humans--I don't think they'd ever actually work as human characters because there's a lot of instances where their Neopet species' physiology comes into play in the stories. But anyway it was just a not-too-serious thought exercise.

Also this was the point at which I realized I'd like some better sketching markers--the ones I was using were in a limited range of colors, and I imagine human Kass would have a darker skin tone but I just could not get myself to give him bright orange skin. Next time I'm in the vicinity of a craft store I'll have to pick up some more neutral colors. 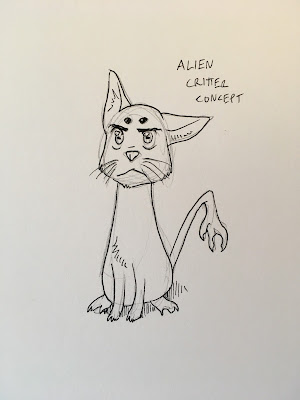 Also, trying to tinker with a suuuuper old character design (I'm talking high school here) and I think I came up with something pretty cute. I actually might use this design in a science fiction novel concept I've been tossing around (maybe the novel I'll work on after this next one). That one will be a lot of fun--it's about spacetime going haywire and quantum entanglement and what do you do when you were en route to the Moon and suddenly you're in the middle of the Andromeda Galaxy with a motley crew of alien space pirates???? Should be good times.
Posted by T. Arispe at 1:08 PM