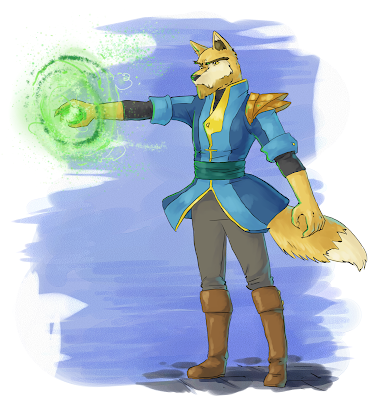 Here's some character design work that... did not need to be this complicated but I got carried away. :) It's for a Neopets fanfic that I just finished, and even though I don't think I'll ever submit it to the Neopian Times because I don't play the website anymore, I'm just too attached to the cast I created, and I was inspired with a story idea that gives them some really good closure. So even if it's the last Neopets thing I write, I think it went out on a good note. I'll put it on the blog once I'm done uploading everything else because I'm a stickler about chronological order, and this story makes much more sense if you've read the previous ones. I had a ton of fun with it because I got to throw in some characters from previous stories (Connor! Zoltan! Kass!).

Interestingly, the seed of the plot was actually something I came up with all the way back in high school, during my earliest writing forays for the Times, and originally would have had Hyren as the main character having nightmares. Because back in those days, Hyren was the only one of my Neopets who ever did anything interesting. I remembered the idea down through the years, and finally realized it would actually work a lot better and make more sense with Pharazon as the main character instead. It just goes to show that sometimes, when you keep old story concepts, they'll end up fitting better into something in the future, often something you never even conceived of back when you first got the idea!

As for this character, he's appeared in a previous story, but not in this form. That's all I'll say for now, but I'll also mention that the earth magic might give him away. :)
Posted by T. Arispe at 1:25 PM