Pharazon's Petpet Ganuthor won the Petpet Spotlight a little while back, which was awesome! I also submitted an entry to the Pet Spotlight for Hyren, who definitely had the most interesting backstory of my Neopets, but I never heard back about it. So I figured I might as well share it here!

Also I just really like the idea of holographic newspapers. 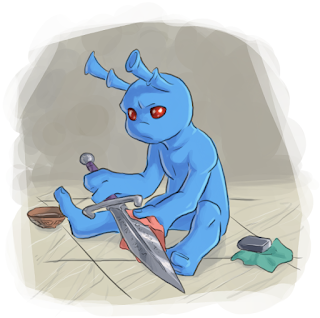 Today, Dark_breed_Hyren thought, was a perfect day for polishing his weapons.

The diminutive blue Grundo sat on the cool marble floor of his armoury, carefully and tenderly going through his collection of weaponry from all over Neopia—and a few from the stars beyond. He cleaned each one, making sure every blade was sharp and every metal polished. His collection had certainly grown over the years, and he was proud of it.

Spring had come early in Altador, and a warm breeze wafted in from the sea, carrying the scent of flowers from the garden. A Naalala bleated somewhere on the hills nearby.

Hyren set down the Maractite Scimitar he had been inspecting and reached for his Dark Longblade Axe. It was an impulse buy in the Haunted Woods, although he’d made good and sure it wasn’t cursed or anything before purchasing it.

“Good morning, Chief!” a chipper voice said from behind him.

Hyren jumped, his antennae twitching. He liked to think he was unflappable, but his sister had a way of popping up out of nowhere that he never quite got used to. “Morning, Blynn,” he said.

The Disco-coloured Zafara ambled over to where he sat. “Galactic Tribune’s here,” Blynn679 said, tossing a holo-stick at the Grundo.

Hyren caught it and pressed the button on the end to activate it. The thin edge of the stick glowed blue, and then a holographic tab appeared on it. Hyren tugged on the virtual display and it expanded into a full newspaper front page.

“They gotta watch how they drop those things,” Blynn said, holding up a small, Virtupets-branded atmospheric entry capsule. “This one nearly went through the roof.”

“Don’t worry,” Hyren said as he scrolled through the news stories from across the galaxy, “those capsules are outfitted with mass dampeners. If any of them did impact the roof, they wouldn’t leave more than a dent in the tiles.” He scanned the articles that talked about Dr. Sloth’s army’s latest conquests, as well as issues of economy and society. The Galactic Tribune was the official newspaper of Sloth’s empire, and Hyren subscribed to it in order to stay aware of what the overlord was up to. Just in case.

One particular headline caught his eye. “Whatever Happened to Commander Hyren?” he read aloud. His eyes widened. “Wow… it’s been a while since anybody wrote about him.”

Blynn snickered and sat beside him. “I know what happened to him,” she said. “He’s sitting in Altador geeking out over weapons.” She leaned in to look at the article. “Keep reading! I wanna see how much they got wrong.”

“Yeah, I’d like to see what they’ve managed to dig up on me,” Hyren said, tapping on the story to expand it. “Commander Garoo is famed throughout the fleet for his exploits,” he read. “Of course Garoo gets all the glory, just like he always wanted,” he muttered under his breath. “Now that I’m gone and Gormos is branded a traitor—“

Hyren cleared his throat and said, “Right. But years ago, another commander stood as his and Gormos’s equal: Commander Hyren, leader of Dr. Sloth’s Mutant Grundo planetary invasion and occupation corps. Hyren was a Mutant Grundo just like his troops, but whereas the other mutated Grundos had been turned into mindless drones capable of being controlled through a neural network, Hyren was an interesting experiment of Dr. Sloth’s. He was allowed to keep his mind and his free will, as Sloth wanted to study the psychology and behaviour of a Mutant Grundo who was loyal to the doctor by choice.”

“I still can’t believe you did that,” Blynn said, folding her arms and scowling at him.

Hyren gave her a self-conscious grimace. “Look, it was either that or get turned into a drone myself,” he said. “And to be fair, what he had to offer me sounded a lot better than wandering around craters with a bunch of dimwits.” He sighed. “You know, I used to look up at the stars and wonder what was out there. None of the other Grundos did that. When Sloth descended from the sky in that big, shiny ship of his… I knew he was what I’d been looking for.” He smiled. “Besides—it all worked out in the end.”

“For countless years, Commander Hyren proved to be a juggernaut in advancing Sloth’s empire across the stars. He and his troops not only occupied a myriad of worlds, but were instrumental in turning the tide in the wars against the Alien Aishas. Hyren’s skill with the sword was matched only by his indomitable spirit. In times when any other being would have thrown in the towel, Hyren kept going, pushing through to victory with sheer grit and the will to survive.” He puffed out his chest proudly. “Oh yes, do go on,” he said to the article.

Blynn held her toes and said, “Because you totally need a bigger ego.”

“Hey, just let me enjoy this,” Hyren said. “It’s well-earned.” He turned back to the article extolling his accomplishments. “Among many other achievements, Hyren successfully secured the Vilox planetary system, including its seventh moon, infamous for its hostile environment that had resisted all previous invasion attempts. Although the campaign lasted two years, Hyren never gave up and eventually every moon in the system fell into Sloth’s hands.

“Another noteworthy deed was his rescue of Omicron Station from an unexpected Space Fungus infestation. Commander Hyren managed to fight his way through the overgrown fungus and contact a fighter squadron to clean the fungus away from the station,” Hyren read. “Aww, they didn’t mention Dothan at all. He really did more than me in that one.”

“Yeah, but this article is about you,” Blynn said.

“Yeah," Hyren said, "but they’re spinning it like I did the whole thing by myself. They always forget about the little guy.” That mattered a lot more to him now that he was the little guy. “Anyway… But all legends must come to an end. Commander Hyren led his troops into Sakhmet in the failed invasion of Neopia fifteen years ago. Commander Garoo, who led the special operations forces in that battle, reported seeing Hyren fall in combat, so when they were forced to retreat, they pulled out without looking for him. Miraculously, Hyren survived—” Hyren glanced up and said, “I like how they never outright say Garoo was lying.”

“Because he probably reads the Tribune too,” Blynn said.

“Yup,” Hyren said. “Miraculously, Hyren survived, and some eight months later returned to Dr. Sloth’s flagship, the Triumph, with hostages in tow to make up for his absence. Unfortunately, it seemed as though so many months planetside had turned the commander soft. In an act of high treason, he not only helped his hostages escape, but he aided other escaped prisoners in an uprising against the ship’s officers.”

“That was good times,” Blynn said.

“It was,” Hyren said. “Except for how absolutely terrified I was for your safety. Now let me finish, we’re almost done. Although the Triumph was commandeered by these rebels despite Garoo’s best efforts, Sloth had one last parting shot—it turned out he had built a failsafe mechanism into Hyren’s mutational genetics. Renouncing his loyalty to Sloth caused the failsafe to trigger, making Hyren’s body shut down. And that was how the mighty Commander Hyren met his end.

“Or was it, really? For fifteen years we’ve accepted that Hyren is gone. But this journalist has her doubts. Even though he was on his way out when Sloth and his officers escaped, no one ever actually saw him expire. And even though Sloth’s genetic engineering is nothing short of utter genius—what if there was some way that Hyren had survived, after all? Unless concrete proof otherwise turns up, perhaps we can all just stop for a moment and wonder if somewhere down on Neopia lives a Mutant Grundo who used to be one of the most feared beings in Dr. Sloth’s military.”

Hyren grinned and looked down at his stubby blue arm. “They’re orbiting the wrong asteroid,” he said. “If they go looking for a Mutant, they’re not going to find anything.”

“I hear she’s impressed by deeds of selfless bravery,” Hyren said. “I think she knew I’d put my past behind me by that point.” He looked over at his Zafara sister. “And I think she knew my family needed me.”

Blynn’s long tail waved behind her. “I’m just sorry she also had to de-mutate you,” she said. “I know it’s hard, not being nearly as big and strong as you used to be.”

“Yeah," Hyren said. "But you know, it doesn’t bother me anymore. I’ll always be me on the inside, no matter what shape I am.” He put the holo-stick down and picked up the Maractite Scimitar, brandishing the blade and watching the dark aqua metal catch the glint of daylight. “Aww yeah,” he said. “I’ve still got it.” Nobody could take away his combat skills, at least.

With a smile, he turned back to Blynn and said, “At any rate, nothing I’ve done in Sloth’s space marine corps compares to my life with you guys. You’re everything I ever wanted.”

“Awww, shucks,” Blynn said. “Even though we’re a little… kooky?”

“I like kooky,” Hyren said. “Keeps me on my toes.” He pulled her into a hug. “Garoo can go ahead and have all the glory. I’ve found something that matters to me a whole lot more. Something really worth fighting for.”
Posted by T. Arispe at 10:11 AM

Email ThisBlogThis!Share to TwitterShare to FacebookShare to Pinterest
Labels: fanfic, neopets, stories on the blog, writing