Although I don't play the website anymore, I've grown rather attached to these characters I wrote so much about, and I really wanted to give their stories a good home where more folks could enjoy them. Free reading is always great, right? :)

So I'm going to put them on the blog in chronological order of when I wrote them--I feel that this makes the most sense from a creative perspective as one can see my concepts for the characters grow and evolve.

First up is "Draik Expectations", and honestly I don't find it my best work, but I do feel it's important because it was the first "serious" thing I wrote for the Neopian Times. Well, it tried to start out kooky and zany like my previous stuff, but then I realized I wanted to tell a less slapstick story about knowing who your true friends are, and about keeping the balance between knowledge and ethics. It was really my first step toward seeing my Neopets as beings with complex personalities who could go through character arcs and sophisticated adventures. It's also important because it's the story where I introduced Celice Anfel, an original character who would go on to become a major player in future stories, and I wouldn't want to include "Worth Searching For" and "The Spirit of Black Keep" without providing the background on how she and Pharazon got to be friends.

I'm also going to do something I've been wanting to try (and is just as fun as I thought it'd be): illustrations for each chapter! My main rationale behind this is that, while I've been trying to link to official Neopets illustrations throughout the text of my fanfic so non-Neopets players will know what I am talking about, I can't do that for characters I made up, like Celice, Suhel, and Zoltan. And rather than just plunk down some concept art of them, I thought it would be much more enjoyable to give the reader a firm idea of what I see in my mind's eye when I write these stories.

Also, please note that these stories will not look the same as they do in the Neopian Times--I have edited them considerably to bring them up to speed with my current writing skills and make them all-around better stories. I treat these revised versions as canon and I highly recommend them over what got published in the Times.

Anyway, without further ado, please enjoy the first chapter of "Draik Expectations"! I'll put more up when I can! 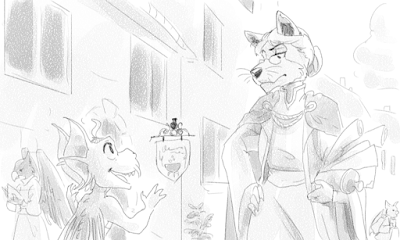 “Explain to me again why we’re always on the way somewhere,” Hyren the blue Grundo said as he tromped down a well-worn woodland path, glowering at the faerie Draik beside him.

“We’re not always on the way somewhere,” his brother Pharazon said. “We do get there eventually.” Somewhere up ahead he could hear the gleeful cries of a certain disco Zafara, but he paid them no heed. He was on a most important errand and could not be bothered with his childish older sister’s antics.  “You could have stayed back in Meridell with Terra while she gets over her cold, Mister Grumpy Grundo. Why are you here?”

“Damage control,” Hyren said with a shrug. He glanced up at his taller younger brother. “What I don’t get is why you’re here.”

Pharazon stood up a little straighter and puffed out his chest. “Because,” he said, “today’s the day I’m going to become a Brightvale scholar.”

The Grundo rolled his eyes and said, “I still don’t get why you’re obsessed with that kingdom, Pharazon. It’s a bunch of stuffy, self-righteous know-it-alls. And personally, I don’t trust anyone who likes stained glass that much.”

“Well, excuse me for not wanting to be a rube,” Pharazon sniffed, buffing his claws on his chest scales. “No offense, but some of us want more out of life than beating up the Pant Devil.”

“You guuuuuuuys!” Blynn’s voice cut through the morning air, sending a flock of Albats scattering into the trees. “We’re heeeeere!” The aforementioned disco Zafara poked her head out of a nearby tree. “We made it to—“ She promptly lost her grip and tumbled to the ground in front of the Grundo and the Draik.

“Right on schedule,” Hyren said. “So, where does one need to go in order to become a Brightvale scholar?”

“The palace, of course!” Pharazon said as they crested the last rise. “Brightvale University is built right in to Brightvale Castle. So fitting!”

Before them spread a pastoral landscape peppered with small hamlets and patches of farmland. And straight ahead, past the gated city walls, rose a towering castle with white, green, and gold flags flapping sharply from its parapets. To Pharazon, the palace seemed to welcome him, to invite him to join its ranks of great minds.

“Such a marvelous bastion of knowledge!” the Draik said, clasping his paws as they strolled into the castle town. “The finest intellectuals in all of Neopia gather there for a veritable symphony of learning! Why, their collective brainpower could—“

“Hold that thought,” Hyren said. “Blynn just took off for that fruit vendor.” He turned and ran after her.

Pharazon was left to his own devices in the world of his dreams. He wandered down the main street, soaking it all in with his jaw hanging open. The sheer number of bookstores alone was staggering, not to mention all the shops dedicated to magic or scholars’ supplies. Everything and everyone here was dedicated to the pursuit of amassing information. This was what Pharazon wanted—he was sure of it.

Other Neopets strutted about the streets, holding books and scrolls and looking quite important. Pharazon waved to them, but they simply regarded him with narrowed eyes and moved on. He was sure it was just because they, being scholars, were simply too preoccupied with their amazing research to socialise at the moment.

He was so busy daydreaming of how he would astonish all of his professors and classmates with his sharp mind, and earn no less than twenty-five degrees in various fields, that he suddenly walked into someone.

“I beg your pardon!” a female voice said sharply, almost as if it was Pharazon who should be begging for her pardon instead. But Pharazon felt she had every right to be upset because he was being careless.

Pharazon looked up to see a white Lupe standing over him, straightening her forest green robes with one paw, while her other arm held a stack of scrolls. Her snowy hair was pulled up in a tight bun and a pair of spectacles perched on her muzzle.

“I—I’m sorry,” the Draik said. “I wasn’t looking where I was going, I suppose I was just so absorbed in the marvelous atmosphere of this—“

“Well, get your head out of the clouds,” the Lupe snapped. “Typical for a faerie pet! I was on my way to a symposium on the Petpet Puddle, and thanks to your carelessness…” Her golden eyes widened and her ears perked. “Wait—a faerie pet, here in Brightvale? Are you from Faerieland, by any chance?”

“I was only painted faerie,” Pharazon said. “My family’s originally from Neopia Central, but a few years ago we moved to Alt—“

“W-well, I’m actually here to get into Brightvale University!” Pharazon said. “All my life, I’ve loved learning, and now I think I’m finally ready to become one of your famous minds!”

“Not just anyone gets to study at Brightvale,” the Lupe said, pushing her glasses up her snout. “But… I may be able to offer some assistance. If you do something for me in return.”

“Anything!” Pharazon said. “Please! I’ll do anything you want me to!”

The scholar grinned rather toothily, a gleam in her eyes. “I’m doing my doctoral dissertation on faerie Neopets,” she said, “but I’ve been having the most difficult time finding a faerie Draik to study. They’re dreadfully uncommon, after all.”

The Lupe regarded his paw for a moment and then shook it briefly as though it had something sticky on it. “Lady Celice Anfel,” she said. “Currently going for my doctorate in General Magical Studies.”

“Celice Anfel?” Pharazon asked. “You had an essay published in Modern Spells, didn’t you! The one about the effects of Air Faerie magic on Shenkuuvian airship aerodynamics?”

“Yes, yes,” Celice said, waving a paw as she beamed proudly. “And I do hope you’ve read The Mote Encyclopedia. I wrote the entries on Electrical Motes and Weewoo Motes, and the biography of Mada Llewor.”

“An eccentric Haunted Woods scholar who dedicated his career to his crackpot postulations on the existence of Jelly Motes,” Celice said. “Anyhow, here’s the deal. You let me do research on your fae properties, and I’ll introduce you to the Department of Magic. You’re far more likely to be accepted with an endorsement from someone with my credentials, even if you are from…” She sniffed. “Neopia Central.”

Pharazon twisted his tail nervously and he said, “You’d—you’d really do that for me, Lady Anfel?” A grin spread across his face as he realised his dreams were coming true. “Oh, this is the greatest day of my life!” he said. His wings fluttered in excitement, throwing off cyan sparks of faerie dust. Several Neopets passing by stopped to stare at him, and his scales flushed in embarrassment. “S-sorry,” Pharazon said. “They do that when I get worked up about something. It’s a faerie thing.”

Celice, meanwhile, took out a notepad and a pencil. “Beginning my observation of faerie Draik subject,” she muttered to herself. “Subject has no decorum, the poor soul. This ought to be interesting.”

The sorceress glanced up at him. After an awkward pause, she cleared her throat. “Yes—of course,” she said, holding her notepad so Pharazon couldn’t see it. “Well, let’s be off to the University, shall we?”

Email ThisBlogThis!Share to TwitterShare to FacebookShare to Pinterest
Labels: fanfic, neopets, stories on the blog, writing