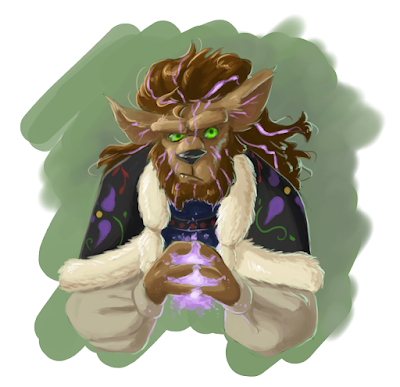 More painting! I picked Zoltan as my next subject because he's got all these fun glowy effects going on, as well as a nice range of textures. I'm quite fond of how his design turned out. I seem to make a hobby out of creating good guys who look like bad guys... although that's also a component of Zoltan's character, that he likes to allow rumors about him to flow unchecked, so people will fear him and thus leave him alone to do his job which is fighting real bad guys. Except, Terra and her family don't go for that silly nonsense and they feed him pizza instead. :)

Nerd moment: Zoltan is actually named after Zoltan Levay, the recently-retired visualization expert for the Hubble Space Telescope, the individual largely responsible for why Hubble images have turned out as breathtakingly awesome as they have. I find it ironic that Zoltan Arnyek works with shadow magic, while his namesake's profession deals with the manipulation of light data.

If you're wondering about Voyage of the Kaus Media, yes, I am still working on it! It's been kind of slow going because I have been busy with family stuff and other jobs, but I am slowly but surely getting through the second draft. Already it's looking a lot better. I took the liberty of making Princess Nir even more ridiculous, because she is a teenage girl after all. I also added in a scene where Angela, Saixaphas, Berenice, and Radnama play charades while they're stuck waiting somewhere, because what else would you do in that situation, really? :)
Posted by T. Arispe at 9:29 PM