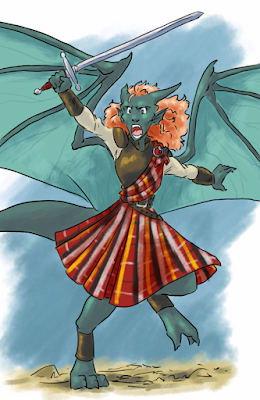 Disney's Gargoyles fan art needed to happen. :) This show is legit one of my favorite things of all time--I watched it when it first aired, and knowing there was a new episode on Friday afternoons got me through a lot of weeks of school when I would rather have not been at school. (I was a contrary child.)

Honestly I think a portion of the reason I like Gargoyles so much (besides the awesome concept, great writing, and characters I totally wanted to be friends with) is because I have Scottish ancestry, so basing anything off of Scotland earns huge brownie points with me. :) I had many childhood fantasies about my ancestors somehow being connected with gargs... and of course I wanted so badly to go to Manhattan and find Goliath's clan myself and help out in their awesome adventures.

And then I grew up and learned how to draw not badly and realized that's what fan art is for. :) So here's an epic garg warrior who fought alongside my Clan Cameron, quite possibly the craziest of those crazy highland clans. Camerons fought for King Robert the Bruce, and much much later fought in World War II wearing kilts, scaring the stuffing out of their enemies with their ferocity. Even if they didn't have awesome monster-warriors assisting them, the Camerons sure fought like gargs to defend their families and their homeland and do battle for a valiant cause.

And her red hair is an homage to another of my Scottish lines, the Maitlands from Glasgow, who were apparently known for their red hair and fiery tempers. Carrot-top-ness really does run in that line of my family--my grandpa had bright red hair before it went white (he still has red eyebrows). (Also the fiery tempers bit is true.)

Her tartan is not the Cameron tartan - it's just a random design I made up hence why it looks so bad - but clan tartans actually didn't start being a thing until the 1800s, so I felt it would be inauthentic to have a medieval garg care about what tartan pattern she was wearing.

I have been to Manhattan. Didn't see any gargs. Next time I'll be sure to look harder.
Posted by T. Arispe at 8:39 PM