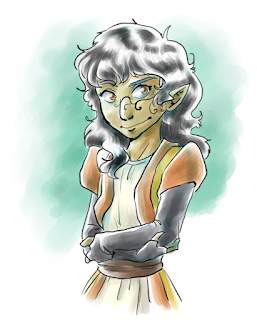 This is a character from an old and not that great story concept I came up with in high school about elemental dragons who could assume human form and, I dunno, had dragon drama going on or something. I'm kind of fiddling with the idea of retooling it as a novel eventually. It would take place in the Middle Ages, and this would be the main character, an intellectual shadow dragon from Persia who has to travel to hopelessly backwards Europe to find three other dragons currently masquerading as humans. One has firmly entrenched himself in the French court, one has joined a Highlands clan in Scotland, and one... is a smelly wizard living alone in the English woods. She's got her work cut out for her.

Also in this picture I figured out what happens if you watercolor on a layer that you left set to "pick up underlying color"! Not gonna lie, I think it looks awesome.
Posted by T. Arispe at 10:13 PM