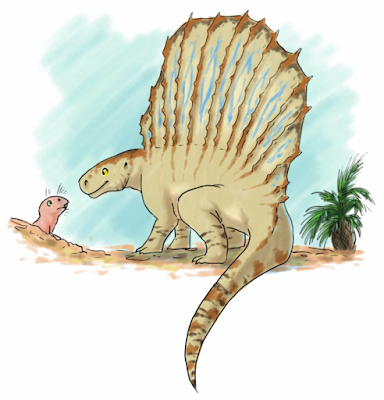 Giving some love to Edaphosaurus, that other sail-backed synapsid. (Sails were apparently very much in vogue during the early Permian.)

Also I kiiiiiind of was not perfectly scientifically accurate with the inclusion of my good buddy Lystrosaurus, which only starts showing up in the fossil record in the mid-Permian, but I am invoking the Signor-Lipps effect clause here. Maybe some edaphosaurs survived until the mid-Permian. Maybe lystrosaurs started showing up in the early Permian. Maybe I just thought it'd be really cute to draw two Permian herbivore pals hanging out.
Posted by T. Arispe at 4:16 PM