That being said, I didn't want to just cut out his role in the plot entirely--while it's not absolutely integral to the plot, I wanted to throw a wrench into the usual cast, and I had a good character arc planned out for Terra that he would be involved in. So I decided a wholly new character was in order! :) 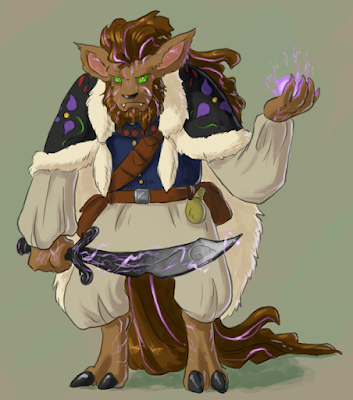 This is Zoltan Arnyek, the Halloween Kyrii battlemage (someone who fights with a synthesis of physical combat and magic). He's a good guy, but he's rather grouchy and distrustful. As for his role in the plot... let's just say he owes Isengrim a favor, and our heroes have found themselves in a situation where they could really use a good magic user and Pharazon's not around.

His design does hearken back to cursed Malum a bit, but that's because I had (non-canon) ideas for why Malum looked the way he did. Zoltan has infused himself with dark magic, which has altered his appearance (and given him magical glowy hair... don't know if it heals people when he sings, though), and he also has channeled this magic through his Shadow Scimitar, imbuing it with extra dark power.

I decided to make him a Kyrii because I realized that Halloween Kyrii are fortuitously also "werewolf"-ish, and considering he and Isengrim first met a long, long time ago (pre-"Worth Fighting For", to be more specific on the timeline), I also realized that after a fellow Werelupe, a Werekyrii would be the most likely creature for past Isengrim to extend kindness to. Plus, considering how many other Lupe main characters I have in this cast (Isengrim, Suhel, Celice, and Connor), I didn't want to make yet another Lupe if it wasn't necessary for plot reasons. (Celice is a Lupe because when I was writing "Draik Expectations", that was the species I randomly chose while making up her character.)

And as for why Zoltan is a Halloween Kyrii--he wants all the power he can get (for a good cause, mind you), so he willingly "let in the wild", as Werelupes term it, and made himself into a Werekyrii.

Oh, and the embroidery on his cape might look out-of-place, but it's actually magical embroidery that contains warding enchantments--possibly the only thing left of his people.

Okay, I've said enough. :) I'm now considerably more excited to work on this story! Not sure when I'll get started, but I have enough finished stuff for the NT to hold me over until then.
Posted by T. Arispe at 7:08 PM