I was going through some old art yesterday and found some Skydwellers concept sketches, and I though I'd share them! 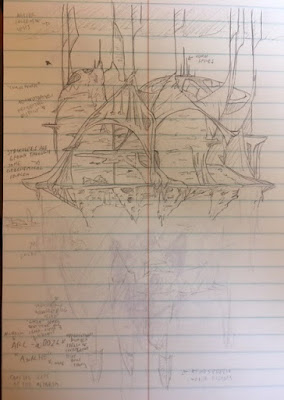 Early concept art for an arcoreum. My original idea was for torium to be a weird material that grows on its own into buildings, but I scrapped that as too out-there. (Because everything else in the book is normal, clearly.) So if I were to re-draw an arcoreum now, it'd probably look less organic. Also, it's supposed to have an extensive underside, as you can see in the fainter sketch below, but I never got around to finishing it. 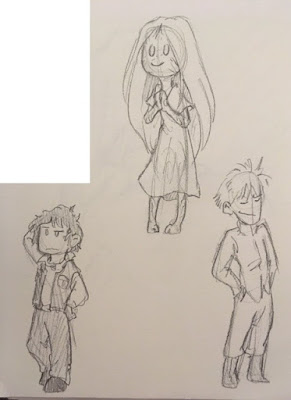 Mathchis, Wilder, and Rohui. I keep forgetting Wilder's freckles auuggghh. Well, like I said before, I only mentioned them once in the entire story and then forgot about them. I was such a marvelously consistent writer who obviously cared deeply about these characters.

And finally, Miette! (I have drawn Kieri, but I didn't bother to take pictures of any sketches of her this time around.)
Posted by T. Arispe at 10:01 AM