Character designs for a My Little Pony: Friendship is Magic fanfic I wrote a few years back and will probably put on the blog once I'm done putting up all my Neopets stuff. It's the story of how a peculiar unicorn saved her small kingdom with the power of happiness, and fought for everyone's right to be happy and hope for a bright future. Because it takes place several centuries before the show, in a made-up region of Equestria, I got to create a lot of pony OCs and even a villainous creature, so it was a lot of fun. 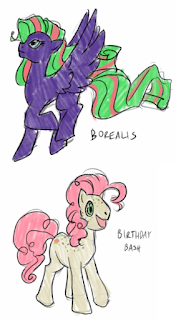 Borealis creates shimmering aurorae in the sky, although she also has a more practical job as leader of a group of exiled ponies who live in the woods. She has given up on the idea of ever being able to return to her home--can anypony convince her otherwise?
Birthday Bash is implied to be a distant ancestor of Pinkie Pie. He's exceptionally good at remembering absolutely everypony's birthday--and throwing them a fantastic party to celebrate. 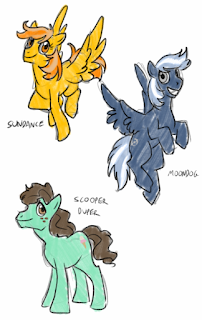 Sundance and Moondog, pegasus siblings, create striking atmospheric phenomena around the sun and moon, respectively. They're not sure why that got them exiled, because it doesn't actually do anything important, it's just nice to look at. Curious.
Scooper Duper makes ice cream and has a real talent for creating new delicious flavors. He's got the color scheme of mint chocolate chip, my favorite ice cream flavor. 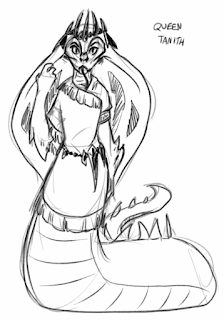 Queen Tanith is a lamia tyrant who has ruled over the kingdom of Daybreak for the past few centuries, working its ponies hard in dim factories to provide goods for other areas outside of Princess Celestia's jurisdiction. Anypony who tries to resist is promptly turned to stone by Tanith or her army of shadow serpents. Nopony knows why Celestia hasn't come to help them yet, but just about everypony has given up hope--except for Radiant Dawn, a unicorn schoolteacher who tries hard to keep her students hopeful and courageous despite the principal's criticism. Hopefully that won't land her in trouble one of these days... (ominous foreshadowing)
Posted by T. Arispe at 11:02 AM