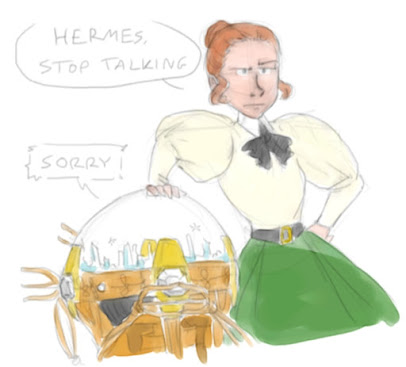 I listened to the first 7 chapters of the Thunder Girl audiobook last night and it. Is. INCREDIBLE. It's coming along absolutely spectacularly, and I'm so excited for everybody to hear it! I think I'll get to listen to the rest soon! That's like 3 more hours of gloriously nerdy steampunk dinosaur fun!
Today I needed to go through and add timestamps to the few lines that needed correcting in the first 7 chapters; I made note of them but didn't add timestamps, but thankfully Ben Fife let me know that would help him locate the lines easier. He is doing a totally professional job, but of course he's only human so it's not going to be 100% perfect the first time around. Just 99.9% perfect. I myself make plenty of typos in my manuscripts despite being a stickler for grammar and spelling. I mean, a number of requested corrections are actually due to my own typos in the manuscript that didn't get caught after several rounds of editing. Whoops. (Don't worry, I'll edit them and upload fixed manuscripts for the ebook/paperback.)
Anyway, this time around, since I didn't have to listen so hard for misreads, I decided to do a bit of doodling as I listened, and did this sketch of Cat and Hermes, who I think are a great protagonistic duo. Except, Hermes sometimes gets so excited that he gets carried away and starts blabbing about important secrets, and Cat has to silence him before he totally ruins everything. It's actually his fault that Mr. du Bois discovered the American Museum of Natural History had the thunder stone. But then, if Mr. du Bois hadn't learned that, Cat's whole wonderful adventure never would have happened, so it all worked out. :)
Looking forward to Thunder Girl coming out in April-ish! Gonna be so much fun!
Posted by T. Arispe at 3:38 PM