Because it's clearly never too soon, here's a doodle to tease my next novel! 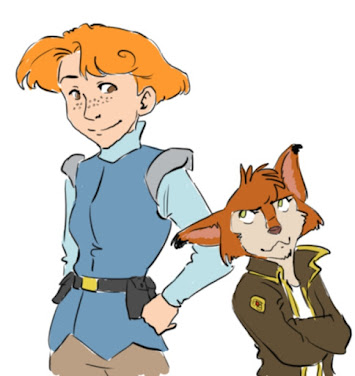 Auva Cameron, Earth native, was on her way to the Moon for a new job when she suddenly found herself in the Andromeda Galaxy instead. Whoops. Good thing it turns out she's got a knack for piloting giant robots! But how, exactly, will that help her get back to Earth? Well, she's got some other things she may need to take care of, first. Will she get to be the hero she's always wanted to be? With everything on the line, she simply can't afford to be mediocre, that's for sure.
Renny Gallahan is an officer in the Challinor Empire's Galactic Police Force who's been assigned to an out-of-the-way sector to hunt down space pirates. What she'd really rather be doing is gathering intel on the Lykoi, a mysterious extragalactic species of wolf-like warriors who are trying to invade and conquer Challinor. But the government has banned Renny from having anything to do with the Lykoi, because many suspect she may be a Lykoi spy.
Sure she's not big, strong, and dark-furred like the Lykoi, but Renny also resembles them more than she does any known Challinorean species. And to complicate matters, she was adopted as a toddler and has no idea who her birth parents were, or how she ended up in an escape pod on her adoptive parents' planet. Despite Renny's overachieving in the police academy and her responsible, no-nonsense methods, many politicians still have their doubts, as do a number of her fellow officers.
When Renny gets put in charge of chaperoning Auva and a motley crew of space pirates on a quest to save Challinor, the officer knows she's purposely being sent on an out-of-the-way mission again, but sees it as an opportunity to - hopefully - prove her loyalty to Challinor for once and for all. And although she and Auva don't see eye-to-eye at first, gradually they come to understand one another and become friends.
What neither of them expect, however, is that their mission to the center of the galaxy will ultimately blow open the case of Renny's past, and with their combined courage and persistence, they might just wind up ending a war along the way.
I'm not sure exactly when I'm going to get started on writing this novel. I'm very, very busy right now. I'll definitely wait until things quiet down and I've gotten adequate rest from Earthkeepers. Still, making plans is fun. :)
Posted by T. Arispe at 8:14 PM