I was chatting with my art pupil the other night, and we were doodling, and I ended up doing a bit of concept art for Earthkeepers! 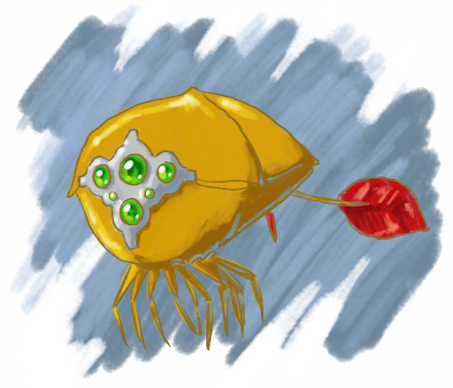 This is one of the main characters, Apparat Drone Model 473 Alloy, a.k.a. "Zuben". He's a friendly, energetic little fellow who enjoys perching on shoulders and exploring the world around him. Miette and her friends found him lying defunct in a secret passageway, and Yonwin restored him to working condition.

But why does Zuben have the same name as the Graling folk hero Zuben Elgenubi? And where does he come from? The answers will change Miette's world forever.

I'm not super great at mechanical design, but I actually got Zuben's design from a dream I had once about this little arthropod creature. When I started brainstorming about Earthkeepers and Zuben, I just couldn't picture him with anything but that creature's design in mechanical form. I use arthropods for mechanical design inspiration a lot because their exoskeletons remind me of metal plating. :)

Those red feather things are aether collecting vanes. Zuben uses them to collect aether from charging streams, as he and the other Apparats run on aether.

Also he speaks Old Gralish, an ancient form of the Graling language, which is represented in the book by Shakespearian English. When the idea first popped into my head, I wasn't sure how well it would work, but as I kept writing it, I liked it more and more. :)

I'm working on some revisions to the manuscript, and I hope to have it ready to send to the editor by the end of the week!