More Pixeldust concept art for y'all! I decided to take a break from writing to do a little doodling. It of course had nothing to do with the fact that I was listening to K. K. Slider covers on YouTube. #AnimalCrossingNewHorizonsAddiction 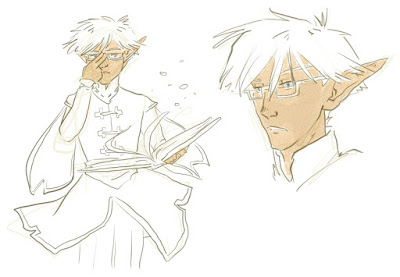 Master Magus Noshé Düs is the smartest and most well-educated person in Avonell, and he'll make sure you know that. It's clear that he's spent much more time brushing up on his magic than his people skills, but as the most powerful mage in the kingdom, all of the mage player characters report to him. However, he is obsessed with obtaining knowledge, and when he discovers he's just a character in a video game, Noshé figures out he can use his magic to manipulate the game's programming, with the eventual goal of leaving the game to learn everything about the outside universe. And he doesn't care what kind of chaos he causes in the process.

Noshé's been fun to write. I don't want to give too much away, but he is one of the main antagonists, and he and Orsamus are a dangerous combination, with Orsamus's volatile emotions and easily bruised pride leading him to carelessly enable Noshé's reckless drive for information... especially because that information will help Orsamus get what he wants. 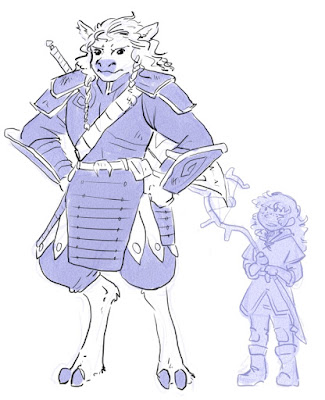 Rin Thunderhoof is a minotaur general in Lord Zaragoz's army, and also one of his close friends. She is a good person, but is very devoted to her job and gets grumpy when things don't go according to plan. Thus, she's very suspicious of Quinny, a random dwarf who somehow found her way into Caed Dhraos and started questioning Zaragoz's operations. Even if Quinny's ideas seem to be working. Eventually, Rin learns that sometimes your best friends can be the most unlikely people, and it's okay to be open to change.

Funnily enough, Rin and Quinny were originally supposed to become friends earlier on in the manuscript, but I found Rin having a very difficult time trusting Quinny, and I felt it made sense given her character, and also helped add a bit of interesting drama to Quinny's life in Caed Dhraos. It also makes it much more satisfying when Quinny ends up saving Rin and her forces and Rin realizes that Quinny's been on her side all along.

I added Quinny for reference because minotaurs are tall--Rin's about seven feet tall and she's a female, so the males are even taller. I also imagine grimalkin are rather tall as a race, averaging maybe 6 and a half feet tall. Sun and moon elves run slightly shorter than that, with females averaging 6 feet. Humans are in the average height range for real average humans - maybe a little on the short side because the game was developed in South Korea - and dwarfs are about four feet tall on average.
Posted by T. Arispe at 2:27 PM