And why not, here's some older Neopets art that I like too. :)

I drew this for my Neopets user profile back before Photobucket egmsploded and disallowed direct linking. :( Maybe someday I'll try to find another image host. This picture encapsulates everything my Neopian family is about: adventure, hijinks, and magical weapons of questionable origins. (Not pictured: Werelupes.)

(Terra's sword is not actually all that cool compared to her Neopets', but it probably still has at least a few enchantments on it, just to be safe.) 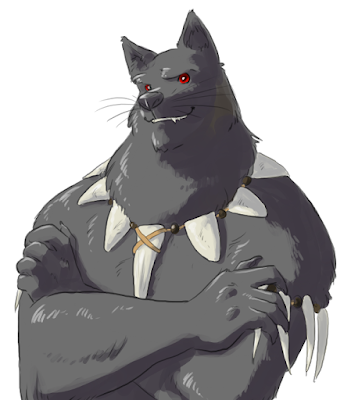 I really like this picture of Isengrim because he looks suitably smug and cocky. Well, when you're the Werelupe King you can afford to ooze confidence. 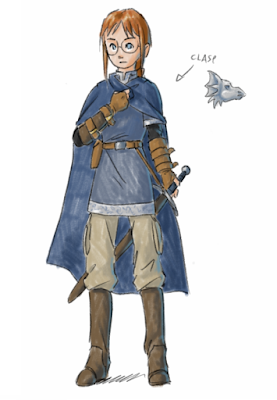 Concept art for Terra from "Return to Lynwood", which is still one of my favorite things I have written lately. One of the things I really love about Neopia is how there are so many different cultures, and when you adventure as much as Terra's family does, you get to experience all the fun things those cultures have to offer. Terra probably picked up a lot of this garb in Meridell, and it's her go-to outfit for travel in more temperate climes such as the Haunted Woods. Also it just looks epic. 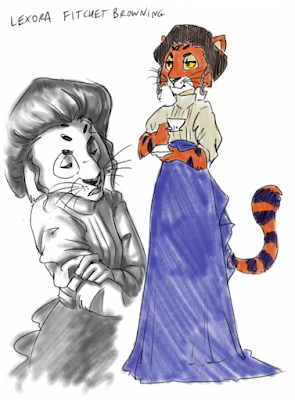 Concept art for Lexora, who went from a one-off character in a short story to a major main character in "Return to Lynwood". Because that's how I roll. The Haunted Woods is usually given a Victorian flair on-site, but I went with a more Edwardian edge for Barrowmere because I like the Edwardian era better, both in terms of society and fashion. (Just say no to corsets!) Sassy Edwardian tiger-ladies are the best. 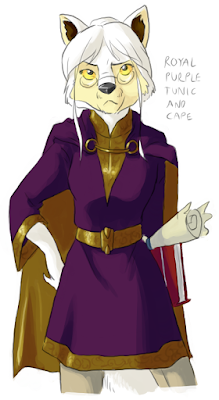 Celice really rocks mages' robes. Not only does she look awesome in them, but it's actually been established in "The Spirit of Black Keep" that she channels her magic through her robes. Because some sorceresses just have that much style. (This one made it into the Art Gallery!) More Isengrim looking suitably regal. Maybe he commissioned a Brightvalian artist to draw his portrait? (Or maybe just Terra did it.) I used a bit of a different technique for this one, doing the line art with ink on paper, and then scanning it in it and coloring it digitally. It did make for some lovely line work. 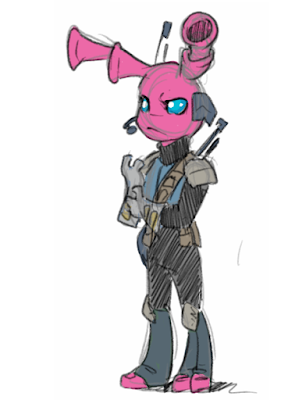 This one's just a random character design... I should not say that I may turn her into a character someday because then I will want to and this is how my insane 12-part series happen. Anyway, I just wanted to try drawing a Grundo Virtupets officer, because my headcanon is that, although mutated Grundos make up a large bulk of Dr. Sloth's military forces, there are still a number of un-mutated Grundos who work for him in various capacities (such as Dothan Reebitz, a former Virtupets communications officer). This gal looks like maybe she's a member of Commander Garoo's void ops strike forces. I write about Virtupets when I feel like pretending I'm a space-military author. 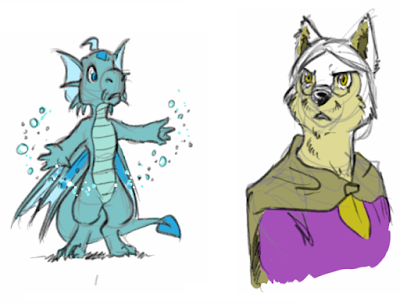 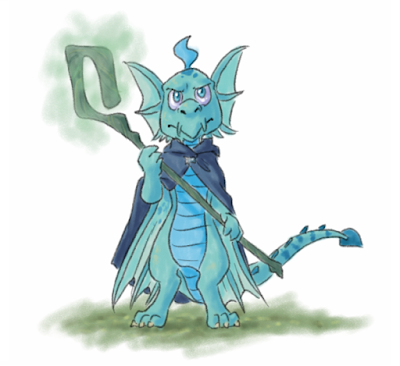 Still really like these portraits of Pharazon and Celice. Pharazon's character arc has been especially fun, as he's one of my more dynamic Neopets characters. He went from someone whose inherent magic was sparkly but ineffective, to someone who realized he could actually do things with his power, and after a few missteps is finally on the path to using his magic the way he feels it was intended to be used. Also, as an aside, note that he usually has his wings folded down his back. Faerie wings, pretty as they are, are also pretty unwieldy if they're constantly sticking out from one's back, so it's my headcanon that most - if not all - faeries and faerie-painted Neopets keep their wings in a resting position most of the time. 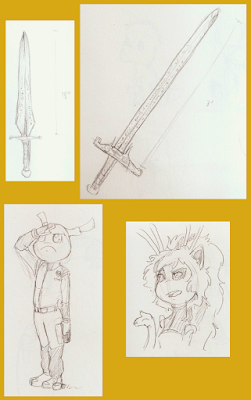 And finally, here are some concept sketches for "Worth Fighting For", waaaay back in the day (and by that I mean 2013), because I still love 'em. Dothan is down there in the bottom left--he would later co-star alongside Hyren in "Never Again, Spiced Apple Pie" which is still great. Sophix V is as fun to draw as she is to write. I feel like she just has some ridiculously large 80's hair and it's fabulous. Must be an Alien Aisha thing.

Also, yes, I bothered to design Hyren's and Terra's swords, because swords are an important part of life. If you're curious, on the left is the shortsword that Terra used in that story and Hyren now uses because for his size, it makes a good regular sword. On the right is the claymore he used when he was a 7-foot-tall mutant, and which he later gifted to Isengrim, who, being 8 feet tall, can wield it equally effectively as a mutant Grundo. Both swords are of ancient faerie make and are magically durable and rustproof, so they're treasures in the family, as well as just plain being formidable weapons.
Posted by T. Arispe at 2:01 PM