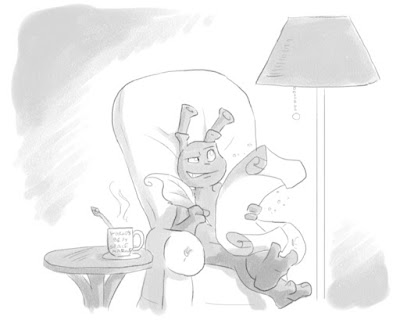 “I had an idea for one,” he said as he started to write.

Finally, as I sat at the kitchen table on a rainy afternoon nibbling at a strawberry frosted Uni cookie and contemplating how great life was, Hyren pulled out the chair across from mine and nudged the scroll toward me.

“Okay, I think I’ve got it pretty much figured out,” he said. Glancing aside, he cleared his throat. “I, uh, could use your help with the editing. I’m not really one for prose.” He paused. “And I kind of want to submit this to the Adventure Spotlight, so it needs to look its best.”

“No problem,” I said, wiping the crumbs off my fingers to unroll the parchment.

Hyren’s blocky, no-nonsense handwriting proclaimed the title of the Neoadventure to be Landing at Amnigeddu Eta. As I read the introduction, which explained that the player would be assuming the role of a space marine scouting out a new planet, I grinned. “Is this a true story?”

Hyren shrugged self-consciously. “Yes and no. It’s fictional, but I based it off of my own experiences, as well as a number of sims I ran in the military. They were great inspiration for worst-case scenarios.” The slightest hint of an amused smile worked its way up his face. “It’s edutainment.”

He leaned over the table to watch me read, and said, “And the star Amnigeddu is real—it’s got twelve major planets, but they were never explored in my day. So I just sort of made stuff up as to what you’d find on the one that looks the most habitable.”

“I’m excited,” I said, and I tapped the glowing writing at the bottom of the parchment that invited me to land my ship on the surface.

In a shimmer of magic, the text on the scroll disappeared, and a moment later filled back in with the next page of the adventure and its choices. It was amazing, I thought, what magic could do, especially in the capable and creative hands of the logomancer Borri.

But let me tell you, when it comes to training the next potential galactic explorers, my Grundo doesn’t pull any punches. The adventure started with a spaceship malfunction where I game overed five times just trying to survive the crash landing, and it only went downhill from there. Relentless environmental hazards and ruthless indigenous life forms lurked on every page, and just one wrong choice would – and did many times – end my adventure.

“Hyren, this Neoadventure is… diabolical,” I said after finally managing to escape a Charnie-infested swampland and set up a bivouac. It took me fifteen minutes of excruciating trial-and-error and countless restarts.

“The average Neopian knows nothing about basic survival,” Hyren said. “I’m just trying to fix that.”

“Yes,” I said, “thank goodness I now know how to respond to a malfunctioning micrometeoroid shield.”

He folded his arms. “The life you save could be your own.”

I guess that was the last word on that, because I kept adventuring. After settling in to my shelter and making sure all sensors were activated, I felt a little more confident. Surviving the first day meant I could survive the rest, right? I tapped the text that would take me to morning.

Boy, was I in for a rude awakening.

“But now I’m toast just because I neglected to activate my armour’s radiation shielding!”

“That’s one of the first things they teach you in basic training!” Hyren said.

I sighed and sat back in my chair, running a hand through my hair. “Please tell me it doesn’t get worse from here.”

“Oh, it does,” Hyren said. “You haven’t encountered the rampaging giant Tencals yet.”

By this point I was determined to never venture off-planet again—I had even begun to have doubts about stepping outside my house. And I really wanted to invest in a radiation shielding unit. But I told my Grundo I would edit his elaborately crafted nightmare, so I somehow soldiered through one terrifying week on Amnigeddu Eta.

When I finally got to a page describing more forces coming to secure the planet - and the words “The End” - I heaved a huge sigh of relief. “I made it,” I gasped. And I’d managed to proofread all the way through, too, which I thought deserved double accolades.

“Way to not give up,” Hyren said. “I knew you could get through it.”

“Only because I’m stubborn,” I said. “Congratulations, you’ve managed to create probably the most difficult Neoadventure in existence. And it’s even worse because it actually makes sense.”

“Yeah, I guess they can’t all be personality quizzes,” I said with a laugh. A thought struck me and my smile faded. “What are the chances of a gamma ray burst happening nearby enough to affect Neopia?”

“Slim,” Hyren said. “And even slimmer because the SpaceFaerie has set powerful wards around our system. It’s not anything to worry about unless you venture to interstellar space.”

Just to get as rounded of an opinion as possible, Hyren tested his Neoadventure out on Blynn and Pharazon too. Blynn quickly grew frustrated with the whole ordeal—the disco Zafara complained about being restricted to pre-set choices, when she really wanted to use chewing gum to patch up the coolant leak in the ship’s antigrav generator.

Hyren admitted that the chemical properties of chewing gum would actually make it an effective seal, but he had to draw a line on the number of choices somewhere, and few Neopets would consider Blynn’s unconventional solutions. So Blynn scampered away to pretend to be a space marine under her own conditions.

Pharazon was more amiable, and managed to finish eventually, but he agreed that the fiendishly hard Neoadventure would not appeal to the average Neopian. The faerie Draik suggested toning the difficulty down and taking the time to explain the more obscure concepts discussed in the text.

“I would,” Hyren said, “but that would take a whole other adventure in itself. Maybe I’ll write a prequel about basic training.” He looked a little too happy at that proposition.

“Let’s not give him any more ideas,” Pharazon said to me, and I agreed.

Finally, after some tweaking, Hyren submitted his mind-breaking survival story to the Adventure Spotlight. And then we waited.

Well, he waited. I kinda forgot about it because of frosted Uni cookies.

That is, until about two weeks later, when a rather dismayed “What?!” echoed through the halls of my Neohome. As I was sat once again in the library, I looked up from my reading to see Hyren storm toward me, a Neomail clutched in one fist.

“How could they do this to me?!” he groaned. “I worked long and hard on that Neoadventure!”

I put the book aside and gave him a concerned grimace. “What happened? Did it get rejected?”

“No, I think this is worse than rejection,” Hyren grumbled. He un-wadded the paper and read it. “Dear Dark_breed_Hyren: Congratulations! Your Neoadventure Landing at Amnigeddu Eta has won the Adventure Spotlight for excellence in the Comedy category! The judges were highly amused by your unrealistically exaggerated scenarios and the heavy use of irony throughout the entire adventure. We think many Neopians will enjoy your unique brand of dark humour and satire.”

“I submitted it under the Instructional category!” Hyren said.

“No one understands your genius,” I said.

“Evidently not,” he said.

The End
Return to all Neopets fanfiction
Posted by T. Arispe at 2:11 PM

Email ThisBlogThis!Share to TwitterShare to FacebookShare to Pinterest
Labels: neopets, stories on the blog, writing