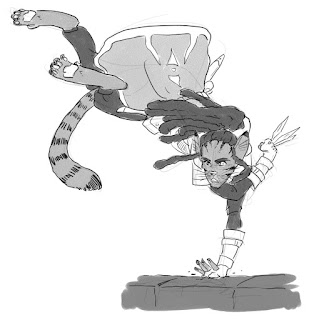 I had a little spare time, so I thought I'd doodle another Pixeldust character!
This is Marlowe, the leader of the thieves' guild in Avonell (you might remember my sketch of her from a few months ago). Although usually a notorious outlaw who's committed the kingdom's biggest heists, the charismatic, quick-witted grimalkin has called a temporary truce with the other leaders of Avonell to fight the threat of General Noggerath.
Ironically, Marlowe is actually the nicest and friendliest of the five Avonellian faction leaders; she just got programmed with some regrettable ethics. But her AI is so advanced that she's able to overcome her programming, and ends up being a valued friend and ally to Quinny and Lorik when the other faction leaders start going haywire and antagonizing player characters.
Marlowe is also the most wildly popular character in Heroes of Avonell and gets the lion's share of the merchandise in real life, much to the chagrin of someone who's used to keeping a low profile.
Posted by T. Arispe at 2:47 PM