I really didn't mean to go AWOL for a month. So at the beginning of October, I went on a social media fast. I'm a member of the Church of Jesus Christ of Latter-day Saints, and the Church's president, God's prophet on the Earth today, invited the women of the Church to participate in a 10-day social media fast. I'm an overachiever who refuses to miss out on any blessings that come as a result of following the prophet's inspired counsel, so I decided that included blogging, too. And then I had family in town, and lots and lots of work, which are both awesome, but those things combined do not exactly leave me very much free time. :)

So I apologize for not posting sooner, but here's a doodle to make up for it!

I was fiddling around with the brushes in my art app on my tablet, and I think I made a brush that emulates Copic markers quite nicely! Which is awesome, because those things are expensive. I also made a brush that looks a good deal like a brush-tip pen, that seems like it'll give me some really nice line work. I decided to test them out on a doodle of Angela Marten from Voyage of the Kaus Media, doing her glowy psion thing. Actually I think she gets glowier than this, but seeing as the whole point of this picture was to experiment with the line art and coloring, I didn't want to drown that out with fancy effects. 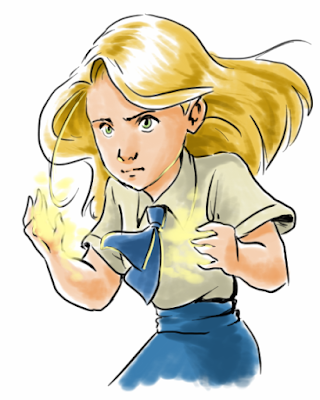 Speaking of Voyage of the Kaus Media, I have been making good progress on revising the manuscript! I am a little over halfway through it now, and I ended up pretty heavily reworking most of the beginning of the book, trying to make Angela's character arc make more sense. Hopefully this doesn't make the first part of the book seem too morose, but it just wasn't realistic to have her kind of forget about everything going on and have happy fun times with her friends, especially when she was still struggling with low self-worth, lack of self-confidence, and severe trust issues.

I also greatly expanded her conversations with Radnama in the middle of the book because they're just really fun to write together. I guess I can justify it by the fact that Radnama was Angela's first really close friend after she decided to start taking better care of herself and truly letting the right people into her life, and after a lifetime of dysfunctional relationships she needed to spend a lot of time enjoying a healthy one. Especially because after that, Janus enters the picture and Angela needs a lot of mental and emotional stability to deal with him properly.

Also, the manuscript is now over 100,000 words and I regret nothing. It's going to get even longer, in fact, because there's a section near the end that I need to expand substantially.

So, fun stuff! Not really sure when I'll be done with these edits - and after that, I need to pass it to my proofreader - but I am making progress when I can, and I am definitely still planning on publishing it when it's ready!
Posted by T. Arispe at 10:38 AM

Email ThisBlogThis!Share to TwitterShare to FacebookShare to Pinterest
Labels: art, neopets, the voyage of the kaus media, updates